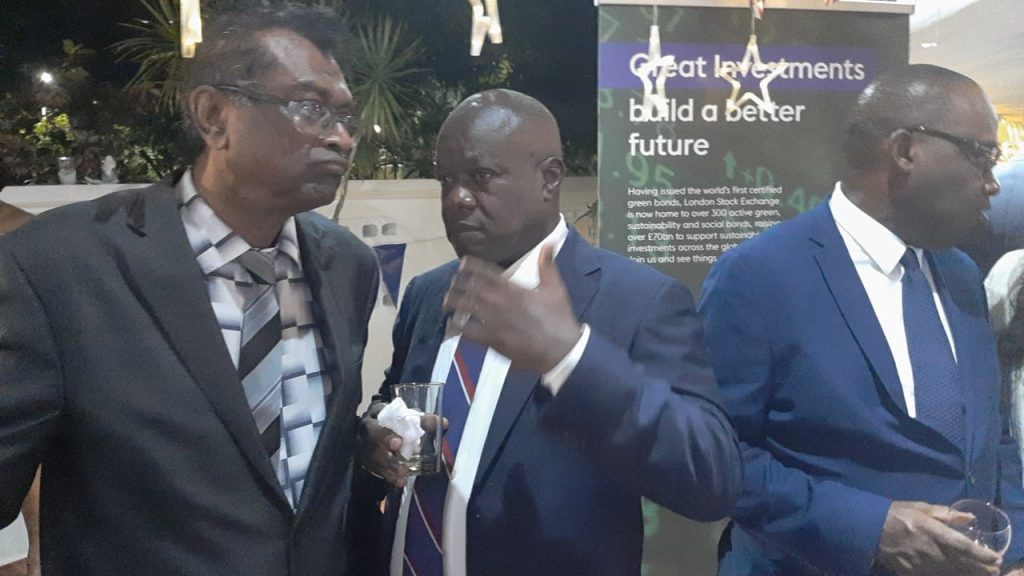 Leader of the Alliance For Change, Khemraj Ramjattan and Opposition Leader Aubrey Norton. At right is Shadow Attorney General and Minister of Legal Affairs, Roysdale Forde.

Even as the Alliance For Change (AFC) threatens to walk away from its coalition with the People’s National Congress Reform (PNCR)-led A Partnership for National Unity (APNU) by year-end, the two political organisations have begun talks.

The two sides held a round of talks about five or six weeks ago and they are due to meet again next week Monday. “It was a fairly cordial meeting and we were going through some of the current issues we are dealing with,” AFC Chairman, Cathy Hughes told a news conference.

AFC Leader Khemraj Ramjattan on Friday bluntly refused to divulge details of  the planned agenda, saying “I do not wish to share that with you now”.

Ms. Hughes said APNU’s delegation was made up of Opposition Leader and PNCR Leader Aubrey Norton, PNCR stalwart  Volda Lawrence and PNCR Chairman Sherwayne Holder. Ms. Lawrence and Mr. Holder are also opposition parliamentarians. No mention was made of the remaining small parties in APNU being represented at those talks.

The APNU and AFC have not been holding joint coalition press conferences for several months now. The Opposition Leader, Aubrey Norton’s press conferences have only been featuring representatives from his PNCR party.

Ms. Hughes referred to ongoing problems in the relationship between AFC and APNU. “We accept that there have been challenges in the relationship that we had with APNU,” Ms. Hughes said. Despite agreements, for instance the APNU had broken a promise for the AFC to secure the Vice Chairmanship of Region Four (Demerara-Mahaica).

The AFC Chairman said her party was now focusing on rebuilding its groups over the next two years so “that by 2024 we would have regained our strength and that is when we figure would be looking at how new coalitions could be formed, what it could look like.”

The AFC has cited the need for “firm agreement and structure” in a coalition or parliamentary cooperation agreement to have greater influence on crafting policy positions and actions while maintaining its independence, rebranding and regaining its identity. “I think that it is absolutely necessary that the least expectation that the public should have from us is that each of the political parties involved would be going out there and independently building and working on the ground so as to strengthen the coalition altogether. It is only then that we will see the true strength of the APNU plus AFC coalition,” Deputy General Secretary, Juretha Fernandes.

While the AFC has over the years complained of bad treatment by APNU, Mr. Ramjattan ruled out his party coalescing with the governing People’s Progressive Party (PPP). Instead, he said the AFC would selectively support those PPP government policies that are considered good for Guyana and are not tainted by bad governance and corruption. “Quite frankly, a coalition with the PPP has got to be a non-starter but if they do good things, as an Alliance For Change independent party, we are going to support them,” he said.

Before formally coalescing with APNU in 2015, Mr Ramjattan had ruled out doing so for fear that the AFC would have lost its identity and support from among Indo-Guyanese and financial support from the Diaspora.

The AFC Chairman announced that it has decided to target a number of the small political parties that had contested the March 2020 general elections as well as non-governmental organisations. “We have discussed that part of our agenda of activities going forward will be reaching out to some of the smaller parties that emerged in the wake of the elections. We regret that some of them seemed to have fizzled away but certainly we want to have more discussions with existing civil society groups, any of the smaller parties, even the trade unions,” she said.

The small parties include A New and United Guyana, Liberty and Justice Party, The New Movement,  The Citizenship Initiative and Change Guyana.