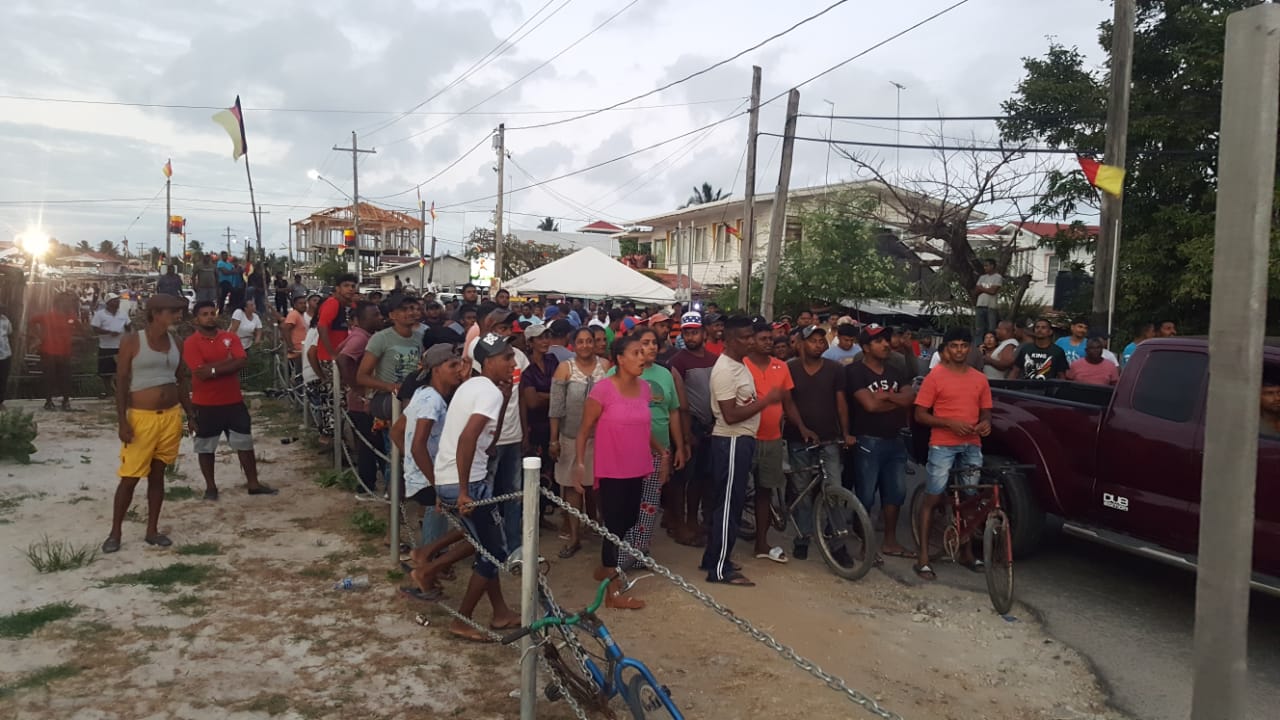 Residents of Mon Repos on the protest line.

Opposition Leader Aubrey Norton has urged supporters to be cautious about protest marches whose aim is to spark off attacks on Indo-Guyanese, in the wake of last month’s assault and robbing of vendors at the Mon Repos Market, East Coast Demerara by a group of persons who marched from Golden Grove to protest the police killing of a resident.

Addressing an event at Golden Grove, he urged supporters to desist from robbing persons. “We will fight for justice for all ethnic groups and so I want to urge the young ones, who seem to believe that every protest is an opportunity for them to rob people, to desist. They are destroying the struggle of the people,” he said.

He contended that the People’s Progressive Party (PPP) was losing its supporters and was now resorting to fomenting ethnic strife. “As the government becomes unpopular, as their own people are turning against them, what the government is seeking to do is to promote ethnic hostilities so that it will help them to mobilise their support base; we must not fall into that trap,” said Mr Norton who is also the leader of the mainly Afro-Guyanese supported People’s National Congress Reform (PNCR).

The police force on June 28, 2022 seemed to have taken little action to prevent the protesters from leaving Golden Grove and they were allowed to march westward for several miles until they reached the flash-point of Mon Repos Market. Asked what explanation the police had given for not taking preventative action, President Irfaan Ali said, “police were on the ground and I’m not making any excuse for the police. The police worked based on intelligence they had, they worked based on information they had,” he said.  Dr Ali said Guyanese should contemplate what could have happened  if the police had taken certain action. “Let us think for a moment if the police was in advance of the crowd and action was taken in a different direction, what might have been the outcome. Some actors might use it against the police,” he said a day after the unrest.

The PNCR Leader also advised supporters not to be misled into marching. “We are struggling and we will struggle sensibly. Not everybody that come and tell you march and go down the road like you. Some of them got their own intention. We will talk at another level how we will struggle to deal with these issues but it is very important that we stay focussed,’ he said.

Mr. Norton sought to assure the gathering that agitation “is not about ethnicity” . “We have nothing against any other ethnic group. We will fight for justice for all ethnic groups,” he said, adding that the aim is to combat discrimination and struggle for a true ‘One Guyana’ in which everyone would be treated fairly such as the award of contracts, an end to extra-judicial killings and the award of compensation.

The vendors, who were robbed and their properties destroyed, were compensated by the Guyana government swiftly but Mr Norton said those who suffered losses at Golden Grove are yet to receive similar assistance. “Why didn’t Irfaan Ali come here to compensate those people…If you believe in One Guyana, compensate here as well .I have no problem with compensation but it must be qual. All mist be treated as the same,” he said.

A police force Lance Corporal, Kristoff De Nobrega, has since been charged with the murder of Quindon Bacchus.