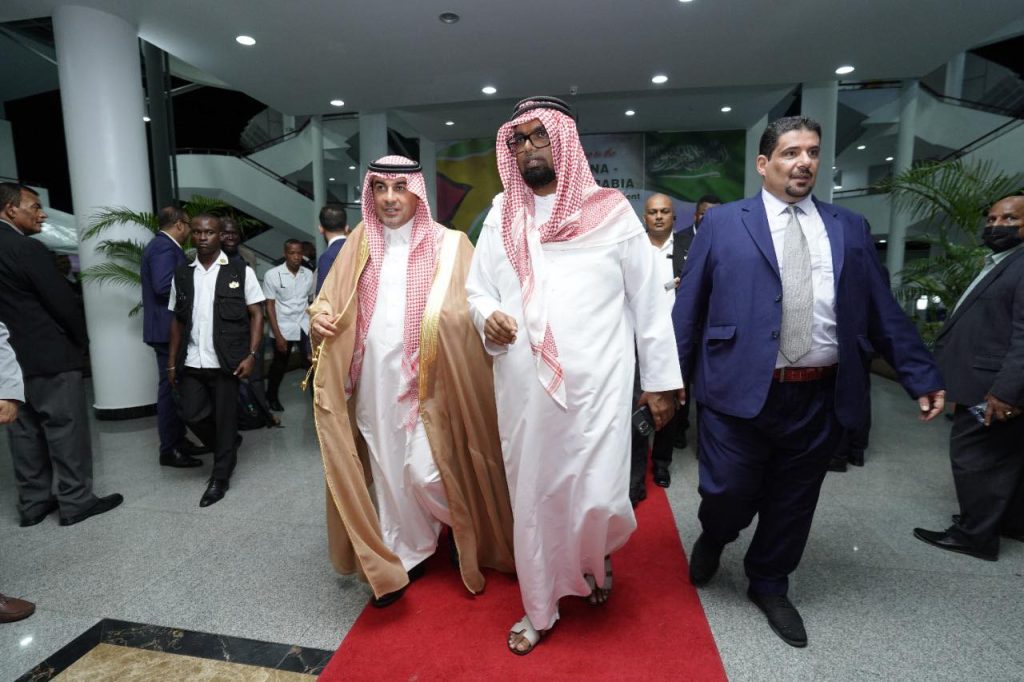 President Irfaan Ali on Saturday asked Saudi Arabia to allocate US$2 billion to potential investments in Guyana, even as that Western Asian nation said it was keenly interested in assisting Guyana to spend some of its oil revenues.

“If it is that in the Saudi Investment and Development Fund, you can say to us today or tomorrow that ‘we are willing to set aside let us US$2 billion…for business development, for public investment in Guyana, let us then talk to the Central Bank and the Minister of Finance on how we establish the fund here with that amount of money to start the process of pushing projects forward,” he said. Dr. Ali also floated the idea of the fund being located in Guyana for the rest of the Caribbean.

Dr Ali recommended that the two sides identify priority areas and establish two working groups from the private sector and government and “let us get this ball rolling.” He said Guyana was also ready to tap into a development fund for small businesses and agriculture. “We are ready. I assure you the bureaucratic hurdle will be removed. We will work on a project accelerated window and basis and the private sector will be a partner on this,” he said.

Saudi Arabia’s Deputy Minister for Investors Outreach, Badr Al Badr told the Guyana-Saudi Arabia Investment Engagement at the Arthur Chung Conference Centre (ACCC) that his country was ready to make available money from the Saudi Fund For Development,  and the Export-Import Bank. “I believe there are so many projects that can be tackled by these Saudi funds for development,” said the official who is heading a 65-member delegation that includes top business executives, officials of investment institutions and government ministries and agencies.

Mr Badr said his company could assist Guyana in using some of its oil earnings. “We also hope to start discussing and sharing with you some thoughts on the different options you have to use your new-found oil and gas revenues and gas reserves to build and diversify your economy,” he said. Options, he said, could include petrochemicals and plastics. ARAMCO, which had been contracted to market Guyana’s crude, was part of the Saudi Arabian delegation.

Mr Al Badr, in seeking to woo the Guyana government and the private sector, said Saudi Arabia is the 16th largest economy in the world, an average annual 4 percent Gross Domestic Product (GDP) for the past 25 years.

Listing agriculture, traditional and renewable energy, manufacturing, tourism, Information Communications Technology (ICT), financial services, transportation logistics, healthcare, construction and engineering, retail and expertise, he asked the Guyana government to provide incentives to Saudi companies. “All what I’m asking is that we should be really getting a special incentive or a special desk under your presidency or even any one of the ministries that handle Saudi investments and look after Saudi investors plus we should be looking for some types of terms and conditions that are tailor-made for these Saudi companies,” he said.

Dr. Ali said a special Saudi Arabia desk would be established at the Ministry of Finance, and Saudi investors would not be treated less favourably than others.

The Deputy Minister for Investors Outreach said Saudi companies could provide experts to help Guyana become a major oil producer and capture, use and store carbon.

The Caribbean, he said, has become a priority zone for investments and business partnerships with Saudi Arabia especially with Guyana’s oil-sector driven economic growth. “Guyana, for us, is a key player in the region and hopefully also a key partner in the global energy ecosystem,” he said. The President said Guyana was ready to provide land for the construction of an embassy that would also serve other Caribbean nations. “I expect that within the next quarter, we must have positive movement on this,” he said. “We are ready for you to have your permanent footprint here. We have already taken a decision that we will also establish a footprint in Saudi Arabia and we’re working out on those details,” he said.

Mr Al Badr said he was looking forward to a “key” follow-up visit to Guyana to concretise trade and business links.

President Ali also urged the Saudi Arabian delegation to consider working with Guyana in establishing in a World Health Organisation-certified pharmaceutical factory similar to that in Rwanda.

2022-07-09
Denis Chabrol
Previous: Norton asks youths to “desist” from robbing people during protests; warns of hidden motive to create ethnic tension
Next: Analysis- Part 2: “How we Will Share the Corn?” The Shortcoming of Guyana’s Local Content Law