As they walked down, they continued to block several parts of the East Coast Demerara Public Road to vent their anger at what the Guyana Police Force has now said is a false report by Guyana Daily News that a policeman, who is accused of the shooting death of Quindon Bacchus has been released from custody.

There was a minimal police presence throughout the journey of the protesters until they arrived near the Vigilance Police Station where they were greeted with a cordon of lawmen with shields. They were accompanies by armed uniformed soldiers.

The protesters passed by the cordon without any inhibition or confrontation.

Police Commissioner Clifton Hicken blamed the unrest on the irresponsible Daily News report  that Special Branch policeman, Kristoff De Nobrega “is not free and that he is on open arrest and confined to headquarters.” 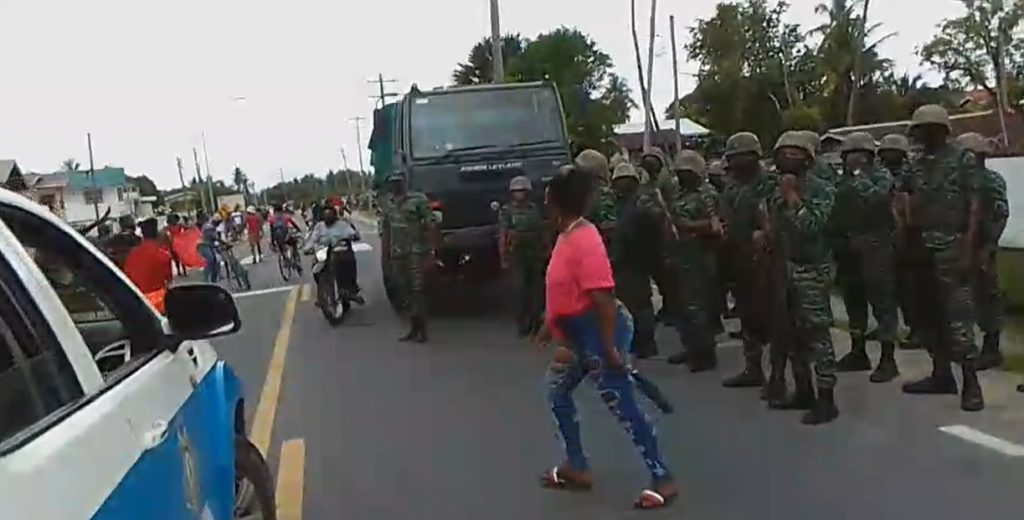 Asked what was being done to deal with the protest that was heading through several villages, Mr Hicken said “we have leaders on the ground, we have the commanders on the ground and we are talking to the people.”

Bacchus was shot several times and killed on June 10, 2022. There are two accounts- one that Bacchus attempted to sell the undercover policeman a handgun and the other that the two had had a previous misunderstanding.

The Police Force has said that the matter has been sent to the Director of Public Prosecutions and the Police Complaints Authority for advice.