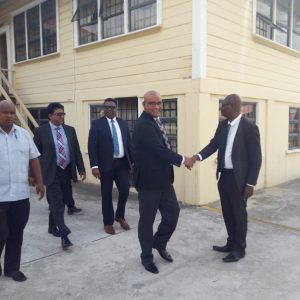 Former President Bharrat Jagdeo and Head of SOCU Assistant Commissioner of Police, Sydney James in a handshake after the politician, accompanied, by his lawyers Anil Nandlall and Sase Gunraj were interviewed briefly by investigators.

Former President Bharrat Jagdeo on Monday invoked presidential immunity and refused to respond to any questions concerning the allocation of housing lands at Goedeverwagting-Plaisance (PradoVille 2) to himself, his then ministers and other top government officials eight years ago.

Head of the Guyana Police Force’s Special Organised Crime Unit (SOCU), Assistant Commissioner Sydney James said after the probe is completed the file would be sent to Police Legal Adviser, Retired Justice Claudette Singh. James said Jagdeo and other Cabinet members were questioned again because “this aspect of the investigation relates to decisions which might have been taken at Cabinet meeting of the 9th of March, 2010.

“As you know, the Executive President, under the Constitution of Guyana, is immune from answering any questions about acts done or decisions made while he is acting in that capacity. The questions related to when Mr. Jagdeo was the President, was Chairman of Cabinet and as such we invoked that article that immunized him from questioning and immunize him from any legal process whatsoever,” Nandlall told reporters in the presence of other lawyers,  Sase Gunraj and Euclin Gomes. Jagdeo and his team of lawyers entered the SOCU offices at 2:11 PM and exited at 2:32 PM.

Jagdeo, who is now Opposition Leader, added that “we intend to file a full defence at some point in time once it gets to the court and that is where you will see all of the issues you have been asking about”. Jagdeo added that the other members of his Cabinet have also decided to “stay silent”.

Before Jagdeo and his team of lawyers entered SOCU, he declined to say why the upscale seaside housing scheme was established, but debunked claims by former Minister of Public Works, Robeson Benn that the reason was linked to the need to ensure the president and the ministers had been properly secured at a time of violence that had led to the killing of then Agriculture Minister, Satyadeow Sawh and two of his siblings in April, 2006.

“He (Benn) said this was his view. This was never discussed at the Cabinet,” Jagdeo said when asked by Demerara Waves.  The former President said if security was a the reason, he would not have gone “at the back next to the seawall where the gunmen can easily hide by the seawall and shoot at you”.

SOCU has claimed that government lost millions of dollars on the sale of the lands below market value to Jagdeo, former ministers Priya Manickchand, Clement Rohee and Robert Persaud as well as former Chief of Staff of the Guyana Defence Force, Retired Rear Admiral Gary Best; former President of the Caribbean Development Bank, Professor Compton Bourne, business executive Ramesh Dookhoo and Director of Public Prosecutions, Shalimar Hack, among others.

Former Agriculture Minister, Robert Persaud has already publicly stated that he would pay what the government says is the real market value of the land.

Meanwhile, Jagdeo said he decided to submit himself to SOCU because, as a constitutional office holder, he wanted t set a precedent for current government ministers and President David Granger to respond to allegations based on a number of complaints  of alleged corruption the PPP intends to file. “I am looking forward to the future investigations that we’ll have and there will be many of them because we have a ton of issues where this government, at the level of the Cabinet, has acted illegally and once they establish this precedent then SOCU will be obligated to pursue it with others,” he said.

The Opposition Leader said when he went into SOCU he wanted to ensure they had the authority to question constitutional office holders to prevent government from claiming that the investigators acted illegally or on their own when it is President David Granger or Prime Minister Moses Nagamootoo’s “time to come here”.