City Hall’s awarding of contracts, handling of no-confidence motion against Town Clerk on agenda for City Hall Commission of Inquiry

The award of contracts  by the City administration and how Town Clerk Royston King escaped a no-confidence motion are among items topping the agenda for a Commission of Inquiry into the operations of the municipality, the Local Government Commission (LGC) indicated Monday afternoon.

“Several of the complaints that have occasioned this step include a reported failure of the City Council to remit workers National Insurance Scheme contributions, failure to remit to the Credit Union contributions deducted from workers’ salaries and issues surrounding the award of contracts in keeping with financial regulations, transparency and accountability among others,” the LGC said.

Among the controversial contracts that had taken centre stage during the past two and half years had been the award of a metered parking contract to Smart City Solutions which expects 80 percent of gross revenues and City Hall 20 percent. Following picketing demonstrations and High Court challenges, central government has decided to send the revised contract to a cabinet sub-committee for consideration.

Empowered to hire, probe, discipline or fire local government officers, the Commission confirmed that the Town Clerk has been sent on administrative leave with effect from Friday, September 21, 2018, in keeping with a decision on June 21, 2018.  The inquiry will run from September 24 to October 30, 2018, but it is unclear when King will return to work because he will remain on leave “pending the examination and determination of all the issues under inquiry.”

Former Chancellor of the Judiciary, Cecil Kennard will be sworn in as the Commission Chairman on Tuesday before Chief Magistrate, Ann Mc Lennan.

The LGC said it decided to hold the Commission of Inquiry after receiving “several complaints on the administration and operations”. The inquiry, according to the constitutional body, would “examine, advise and report on any or all irregularities that may exist within this local government body.”

The LGC unanimously decided on April 17, 2018 to establish the Commission of Inquiry  after discussing the complaints received. 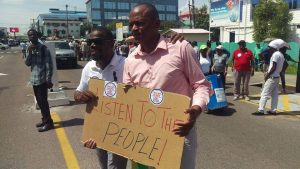 The specific issue concerning a no-confidence motion that had been filed by then Deputy Mayor, Sherod Duncan against the Town Clerk on February 26, 2018 has been identified by the LGC for the inquiry to probe- “The reason for and the process by which a motion of no confidence on the Town Clerk was dealt with by the Mayor and Councillors of the City of Georgetown”. In response, King had cited Duncan for unethical behaviour. By March 12, 2018 City Mayor, Patricia Chase-Green had disallowed a vote on the motion after legal advice that King had sought had been presented to a statutory council meeting.

Attorney-at-Law and former magistrate, Maxwell Edwards had argued that the Council could not discipline the Town Clerk because that is a task for the LGC which was operationalised on October 23, 2017.

The Kennard Commission of Inquiry is also tasked with generally investigating “any matter that may be brought to the attention of the Commissioner during the Inquiry that would adversely affect the administration and operation of the Municipality of Georgetown.”

Members of the public who may wish to engage the Commission of Inquiry are advised to do so via email: [email protected] or on telephone number: (592)-687- 9341.

The Legal Clerk/Secretary of the Commission of Inquiry can be reached at Critchlow Labour College from Monday September 17th to Friday September 21st, inclusive, during the hours of 8:00 a.m. and 4:30 p.m. daily. All persons with information that may aid the work of the Commission of Inquiry or who may have complaints against the Mayor and City Council are encouraged to visit the office established for this purpose to have them addressed.