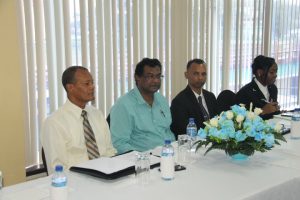 Ecstasy, a date rape drug, has surfaced in several schools in Guyana, triggering a call by Public Security Minister Khemraj Ramjattan for parents to pay greater attention to the welfare of their children.

“We are conscious of the increasing demand for ecstasy among our youth population including children at schools. This drug now seems to be the common narcotic that is readily available at many night clubs and parties,” Deputy Head of the Customs Anti-Narcotics Unit, Lesley Ramlall  said in an address to the opening of the 2018 annual staff training for CANU’s anti-drug agents. He later told reporters that children have admitted to the use of ecstasy leading to the arrest of a number of persons.

Ramlall later said ecstasy use has been found in five schools in Regions Three (West Demerara/Essequibo Islands) and Region Four (Demerara/Mahaica) as well as among rich people. “A lot of people are using it for their sexual enhancement and now it’s trickling down to our youths in schools,” he said.

The Deputy CANU Head expressed grave concern about video recordings of school girls who used the date rape drug. “The disturbing thing is that when you look at some of the videos, when we have gone back and look at the cellphones of  our youths and these children, and you look at the videos that these children have in their phones, especially our girls, it’s really worrying for us in society,” he said.

The Ministry of Education and CANU, he said, have been collaborating wherever necessary.

The Public Security Minister admitted that law enforcement agencies were “losing the battle” because drugs were being used in schools. Against that background, he called on parents to pay greater attention to the activities of their children. “I am not interfering with family life. I am pleading with people- be a little bit more caring to your children; see what they do and do not and that will help them or prevent them from ecstasy and all these things. When they go to a party, what are they doing? Are they having ecstasy with other friends and family members?,” he said.

During the first eight months of 2018, CANU also seized 104 grammes of heroin and 100 grammes of crystal methamphetamine which Ramlall said was a major concern for his anti-drug agency. “While most of our seizures would have indicated that cannabis and cocaine are the dominant narcotics seized, I urge you to take serious note of the synthetic drugs such as heroin, ecstasy and crystal methamphetamine, all of which were seized by the unit in 2018. This is certainly a new trend and a very worrying one for Guyana,” he said.