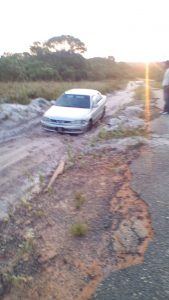 Residents of Kuru Kuru on Monday morning blocked the  Cooperative College Road, saying they are fed up with the deplorable state of the thoroughfare.

Alliance For Change parliamentarian, Michael Carrington said the residents were upset because President David Granger failed to keep his promise to fix the roads in the area.

The residents also claimed that monies were allocated to the Ministry of Public Infrastructure to repair the roads. 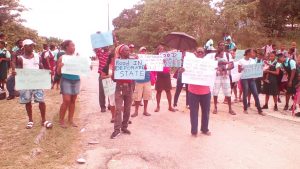 Police later removed vehicle tyres and other  objects that residents used to block the road.

The residents said the road has become increasingly unsafe to traverse by vehicles especially minibus that are shuttling students.

The protest comes as the Local Government Elections campaign slowly heats up ahead of polling day, November 12.

2018-09-17
Denis Chabrol
Previous: Town Clerk Royston King to be sent on leave ahead of Commission of Inquiry
Next: Ecstasy ‘date rape’ drug being sold in schools ; “very worrying” videos of girls found – CANU