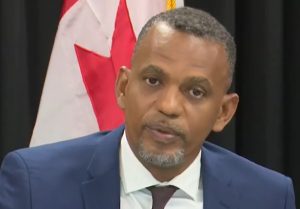 The Caribbean Development Bank (CDB) on Wednesday said Guyana is included in a proposed southern Caribbean shipping route and that consultants are expected to complete a “roadmap” for the wider regional agriculture sector.

CDB’s Director of Projects, Daniel Best told a news conference that the hub would see vessels serving Guyana, Trinidad and Tobago, Barbados and Grenada in the southern Caribbean. He said eventually, experts expect the shipping network to expand to the northern Caribbean.

He said the interim report is expected within the next two months and the full report by the end of September 2023. He said that document is expected to carve out a “roadmap for a sustainable movement of cargo certainly in the first instance and more specifically agri-produce in the southern Caribbean with a view to move northwards.”

Mr Best said the sustainable movement of maritime cargo is pivotal to Caribbean Community (CARICOM) leaders’ aim to reduce the US$5 billion food import bill by 25 percent by 2025. “We have already brought a consultancy aboard looking at not just at the ferry service but also all that would go into sustainable food security.

Meanwhile, President Irfaan Ali on Tuesday said Guyana would establish a Regional Food hub that would include produce and products coming from northern Brazil through the Lethem-Linden in Guyana and eventually to markets in the Caribbean and North America. “This would bring the State of Roraima into play so that we will be working on this very aggressive agenda of this Regional Food Hub,” he said.

The lack of cheap and efficient maritime transportation has been identified as a major constraint facing the Caribbean’s effort to become food secure, lower its food import bill and eat healthy in order to combat non-communicable diseases.

2023-01-18
Denis Chabrol
Previous: CCJ sentences Hinds brothers to life imprisonment with chance of parole after 20 years
Next: More squatting on Linden-Soesdyke Highway lands will not be tolerated; squatters, farmers to be relocated