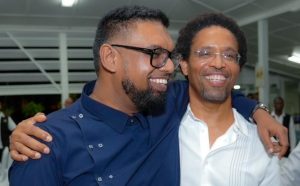 President Irfaan Ali on Thursday defended the decision by government to smash the seven remaining houses on a government reserve at Cane View, Mocha, East Bank Demerara, saying that sufficient was done to negotiate with all of the more than 40 residents there.

“If I attempt to be softer than I am soft on this Mocha issue, then I am telling people just ride me over,”  he said.

During a pre-2023 National Budget consultation with top business executives, Dr Ali was told by City businessman Dr. Terrence Campbell that government needed in future to employ some “soft skills” in dealing with such matters. “Some of these issues, when I see them, the visual evidence sometimes, they disturb me emotionally and I am suggesting without the benefit of all the data that maybe some soft-skill governance training for those who must negotiate these things might beneficial,” he said.

Buffered by armed police, the excavator smashed the wooden and concrete houses and nearby bridges as occupants hurriedly removed their household items and other valuables. “You are moving from squatting on a reserve to housing with net value in a high development area,” he said.

He recalled that there were more than 20 newspaper publications about what was being done, and continuously engaged the remaining seven squatters. In return, he bemoaned a demand by them for hundreds of millions of dollars and the subsequent burning of the excavator valued GY$49 million.  Dr Ali said he had personally spoken about the issue in Mocha, government ministers had gone there more than 12 times, and 28 persons have since relocated from the reserve to government-provided houses and lands.

“So you can turn up with your soft skills and burn a man’s excavator for $49 million,” the President said.

The International Decade for People of African Descent-Guyana (IDPADA-G) earlier this week wrote Housing Minister Collin Croal asking for a meeting to discuss the grievances of the Mocha residents as well as put a system in place to avoid future controversy. “Honourable Minister, the residents of Mocha Arcadia and the African Guyanese community are traumatized by what appears to be an attack on our rights as property-owners and citizens in a democratic state. IDPADA-G requests to meet with you as quickly as possible to discuss the situation in Mocha Arcadia and, given Guyana’s rapid growth, to establish a protocol for managing similar situations in the future,” IDPADA-G’s Chief Executive Officer Olive Sampson said in her January 5, 2023 letter. That organisation had one day earlier conducted a fact-finding mission in the village.

The President lamented that due to the presence of the seven squatters on the reserve, work on that section of the alternative East Bank Demerara Road has been held up and the contractor, K.P. Thomas, has been paying interest on capital.

The demolition of the seven remaining structures was done in the presence of Opposition Leader Aubrey Norton and several opposition parliamentarians who accused the mainly Indo-Guyanese backed People’s Progressive Party Civic administration of targeting Afro-Guyanese by evicting them from ancestral African lands that had been communally acquired in the late 1800s and gazetted . But President Ali lampooned critics for exploiting race to further their political agenda.

“Guess what? Because this is a PPP government, this is a race thing. Building a road that will help every single race, helping 100,000 people everyday that will bring ease to their life…,” he said.  He again vowed to end the racially motivated political mindset. “We are trained to think in a particular way. That is just the brutal truth and I intend to change that damn nonsense. Not every single illegality and nonsense you see, you will cry race and ethnicity and believe that you’ll over the government,” the President said.