8 opposition parliamentarians suspended for “collective vulgarity” in the National Assembly 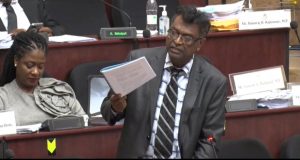 APNU+AFC frontbencher Khemraj Ramjattan holding up the Report of the Committee of Privileges to make two points in an effort to convince the House not to proceed with the debate and passage of that document.

The eight opposition A Partnership for National Unity+Alliance For Change (APNU+AFC) parliamentarians were early Friday morning suspended for allegedly participating in unrest in the National Assembly, despite pending High Court action to block consideration of the Privileges Committee Report.

The opposition legislators want the court to find that their constitutional right to a fair hearing has been violated because they had, in response to a show cause letter, had asked for details of the allegations but none was provided by the Committee. A number of them were seen and heard on live video walking around the Chamber, blowing whistles and forcibly removing the mace in an effort to prevent debate and passage of the Natural Resource Fund law on the grounds that there was inadequate consultation with the opposition and civil society.

Attorney General Anil Nandlall said the work of the National Assembly was firewalled by the separation of powers including the discipline and conduct of the Parliament. “Those are intrinsically and inherently parliamentary functions,” he said, resulting in the need for the executive and the judiciary having to be careful that it does not trespass. “Proceedings have been filed in a mother arm, the judiciary, that seeks to challenge what parliament is seeking to do. Now, right there, there is an apparent conflict because this is a parliamentary function and it is my respectful submission, Sir, that in this particular situation, it is the judiciary that must exercise vigilance, circumspection, caution and care that it does not exceed and trespass into the provincial responsibility of this Parliament; it’s not the other way around,” he said.

Based on the report of the Privileges Committee, Opposition Chief Whip Christopher Jones, Sherod Duncan, Natasha Singh-Lewis and Ganesh Mahipaul were suspended from four consecutive sittings for conducting themselves in a gross disorderly, contumacious, and disrespectful manner, and repeatedly ignoring the authority of the Assembly and that of the Speaker, and thereby committing contempt and breaches of privileges.

Also parliamentarians Annette Ferguson and Vinceroy Jordan were suspended for six consecutive sittings for additionally for committing serious violations which were severe and egregious by unauthorizedly removing the Parliamentary Mace from its rightful position in a disorderly fashion, causing damage to the Mace, injuring and assaulting a staff of the Parliament Office, while attempting to remove the Mace from the Chamber.

With the report having been adopted, parliamentarian Tabitha Sarabo-Halley, according to report, would be suspended for six consecutive sittings for unauthorizedly entering the communication control room of the Arthur Chung Conference Centre and destroying several pieces of audio-visual equipment, being public property.

APNU+AFC front-bencher Khemraj Ramjattan asked the Speaker to consider his own decisions that when matters are before the court, they would not be dealt with by the House. He also said  that the report did not contain any minutes of any evidence of the allegations but references to video rec-recordings, statements from staff members and eyewitness accounts. “Mr Speaker, in relation to this report on the Privileges Committee, this aspect seems clearly to be a deficit of any evidence taken before the committee which is attached here,” he said. “Before you could even go to debate it, it has a deficit that violates Standing Orders 104(4),” he said.

House Speaker Manzoor Nadir said all of the documents were laid before the Committee. “As far as remember seeing, all the documents available for that particular committee were provided,” he said.

While the eight lawmakers have denied committing the acts for which they have been accused, the Governance and Parliamentary Affairs Minister said all parliamentarians saw their “reprehensible” behaviour.

Mr Nadir cited previous rulings by the Houses in the United Kingdom, New Zealand and Kenya that he said state that the report could be considered because the court cases were not active as they were not been assigned to a judge and scheduled for a hearing.
Mr. Ramjattan vehemently rejected that, saying that once a case is filed it becomes active.

The Attorney General, in his presentation, agreed that the case by the eight APNU+AFC lawmakers, was merely filed and has not yet gone through the various stages.

The few remaining APNU+AFC parliamentarians walked out of the sitting while Minister of Parliamentary Affairs and Governance, Gail Gail Teixeira piloted the debate on the motion. She said if the errant parliamentarians had apologised the matter would not have reached the stage of suspension. “This level of collective vulgarity by the members on the opposition side in the APNU+AFC, in this case, cannot be treated lightly,” she said. She recalled that the parliamentarians were asked to show cause why they should not be punished and they all denied perpetrating such acts.

Then President David Granger had described the then opposition People’s Progressive Party Civic (PPPC) parliamentarians as “vulgarians” because they had whipped out placards and chanted him down as he had addressed the Parliament.

Ms. Teixeira said firm action was necessary to send a strong message to current and future lawmakers. “I solidly and totally support the suspension of the eight members and I hope they will take it seriously and not be caught up in in grandstanding in a court of action where parliament and the judiciary are separated,” she added.

Deputy Speaker of the National Assembly, Lenox Shuman said the APNU+AFC parliamentarians displayed double standards on December 29, 2021 when they attempted to block debate and passage of the Natural Resource Fund Act. “We expect our citizens, the people we are to be leaders of, to conduct themselves in a law-abiding manner but yet we display the vulgarity that is unbecoming of these hallowed halls,” he said.