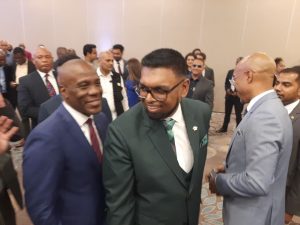 A new merchant bank was Thursday night formally launched with the aim of injecting start-up capital into business ventures that have the potential to expand,  grow and transform as well as search for soft loans for government, officials said.

“None of that can happen without the much-needed finance and it is that gap that we sought to fill; that is the impetus for starting New Hayven,” said the Chairman and Founder of New Hayven Merchant Bank, Dr Floyd Haynes.

Referring to President Irfaan Ali’s vision for Guyana,  the New Hayven boss said the country does not have sufficient money to realise that dream. “There is a huge capital gap or money gap. In other words, there simply isn’t enough money to finance the transformation and development of this country in country. If you add up all the money in the country, it still isn’t enough,” he added.

In that regard, Dr Haynes said some of the money would come as loans from international financial institutions and friendly governments. He said a large chunk of the required cash has to come from private capital with New Hayven expected to play that “crucial role” through a range of financial instruments to help small and mid-sized businesses and infrastructural projects.

President Ali, meanwhile, cautioned against being classified as a Developed or oil-rich nation but one that is “poor developing” that needs to borrow soft loans as the cost of capital is important. “Let us not aim for classification. It will be the biggest mistake  we’ll make. Don’t rush fir someone to call you a citizen of  a Developed country. Let us take our time. Let us maximise the benefit of coming through this phase,” Dr Ali said.

The Guyanese leader said he expected New Hayven to go “hunting” for low-cost financing for the government.

New Hayven’s Chief Executive Officer, Kurt Kisto told the said the bank understands Guyana’s socio-economic “realities” and is equipped to mobilise financing for the public and private sector. Other services to be offered are asset management, investment banking, wealth management, mergers and acquisitions, and real estate financing. “It is thus our vision to be the merchant bank of first choice delivering impact and value for investors and clients, serving as a catalyst for positive change for the country and the people of Guyana,” he said.

The financial institution is located on Church Street, Queenstown in the building that once housed the Leader of the Opposition’s Office.

Both Dr Haynes and President Irfaan Ali admitted that they are friends but Mr Haynes indicated that he did not get any special favours as the Bank of Guyana only granted the licence after it was satisfied. “It isn’t something that was handed down overnight. It was hard work, we persevered and we are quite happy,” Dr Haynes told the launch ceremony at the Marriott Hotel. He also said that the application was being processed over the past two years during which time the Central Bank Governor Dr Gobind Ganga had often asked for additional information

“Dr Ali, Your Excellency,  it is no secret, he is a friend of mine. I make no apologies for it,” said Dr Haynes who also thanked Vice President Bharrat Jagdeo with whom he had visited Africa. The President, in turn recognised Dr Haynes as his friend too.  “Indeed, Floyd and I are friends,” he said, adding that that friendship long predated his assumption to the presidency.

Dr Haynes’ US-based accountancy firm has been contracted by the US State Department to provide accountancy and finance support in more than 100 countries around the world.  He also served on the Local Content panel and is the leads an audit team for the cost recovery audit of ExxonMobil’s expenses in Guyana.