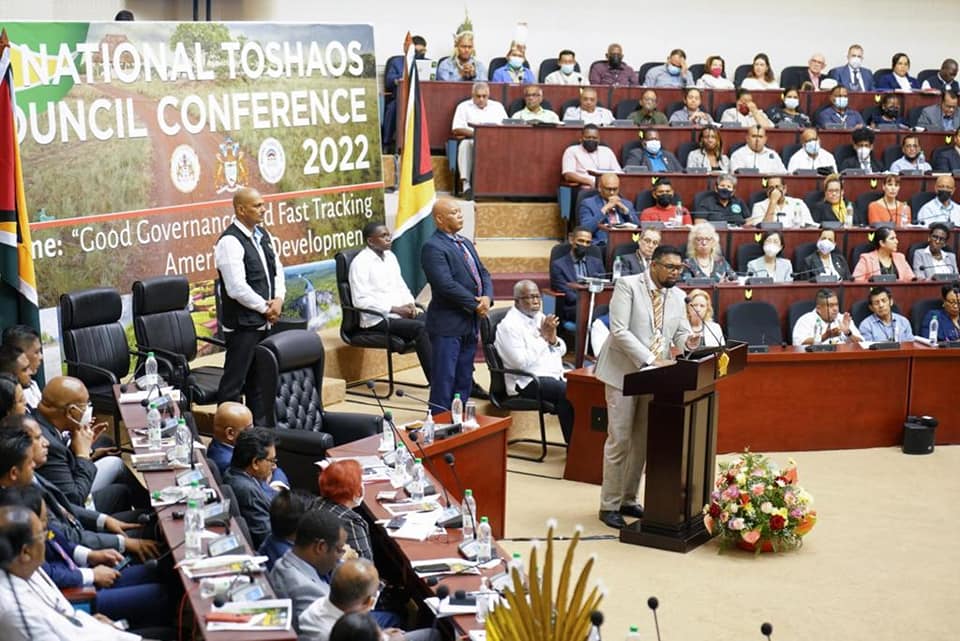 President Irfaan Ali on Monday scoffed at claims that his administration has hijacked the agenda of the National Toshaos Council which is meeting in Georgetown.

In clear  reaction to claims that the People’s Progressive Party (PPP)-led government has opted to control the agenda and prevent the outgoing NTC Chairman from addressing the opening session, the Guyanese leader instead sought to assure the Amerindian village leaders that they would be able to raise any issue with the ministers and other government officials.

The Stabroek News newspaper at the weekend quoted disgruntled Toshaos as recalling that under A Partnership for National Unity+Alliance For Change (APNU+AFC) that they had been allowed to set their agenda for the NTC independently. People’s National Congress Reform (PNCR) executive member, Mervyn Williams lamented the exclusion of Toshaos in crafting the agenda of the July 11 to 15 conference. “Elected Toshaos say they were not consulted with regard to the agenda and none of them is scheduled to chair any session of the five-day programme. A Member of Parliament will do
the vote of thanks following the official opening session,” he said. Mr Williams said the programme does not provide for the outgoing NTC executive to report on its work and handover to the incoming executive.

While a number of letters would continue to appear in the newspapers, Dr Ali said the ministerial cabinet of which he is the head had for several weeks been planning for the NTC to ensure the Toshaos get answers to their questions and assess government’s plans.  He invited the Toshaos to criticise government’s plans. “They are not here for any fanciful exploration. They will be actively participating, bringing their plans to us so you can scrutinize it. You can take them to task you can ask them questions in the full full room and presence of everyone. That is what you call an open and transparent approach to governance, accountability,” he added.

Virtually all government ministers and officials from the Guyana Geology and Mines Commission, Guyana Forestry Commission, Guyana Police Force, Guyana Defence Force, Registry of Births and Deaths and other entities are attending the five-day conference.  The President said he was “shocked” by a recent newspaper report that suggested that the Toshaos’ views were being shut out.

The President said his administration was keen on forging a “common plan and a common platform” through consultations.

He said Amerindian communities would also be targeted in national consultations on constitutional reform by stakeholders.