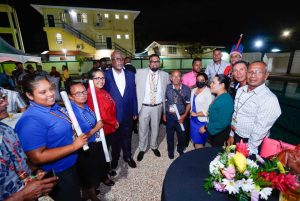 The Toshaos who received the absolute grant and certificates of title.

Minister of Amerindian Affairs, Pauline Sukhai , noting that land titling was “paramount” on government’s agenda, boasted that after less than eight months, the titles were delivered to village leaders.

In his address to the opening of the NTC conference, the President also announced that water is a “social good” and so no one in Amerindian communities would have to pay for it.  He also said the Toshaos stipend would be increased from GY$30,000 to GY$45,000, GY$5,000 short of what had been requested; the stipend for Deputy Toshaos would be upped from GY$20,000 to GY$30,000, senior councillors would receive GY$15,000 to GY$25,000.

Dr Ali said there would also be an increase of the stipend for all regional councillors from GY$10,000 to GY$30,000 in order to improve efficiency and accountability.

Dr Ali said government was keen on investing some of Guyana’s oil revenues in making Amerindian communities “food secure”, improving the healthcare system including the use of Internet hubs to facilitate telemedicine, expanding the hinterland housing programme, increasing access to electricity and developing a tourism master plan for the hinterland. “These are not dreams, these are active programmes,” he said.

The President, meanwhile, called on the relevant authorities to ensure that pensioners are paid in their villages.