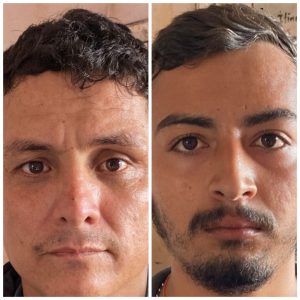 Almost 640 pounds of cocaine were found in bags bearing the marking “King Coca 30” strapped inside a single-engine illegal plane that landed at the Mahdia airstrip in Region 8 (Potaro-Siparuni) on Sunday afternoon, the Guyana Police Force said.

Police said the Cessna Skyline plane, which might have come from neighbouring Venezuela, “landed without authorisation.”

The  cocaine and  120.45 pounds of marijuana were being weighed by anti-narcotics police at the Criminal Investigations Department Headquarters in the presence of Colombian pilot, 42-year old Rodrigues Estiven and Brazilian co-pilot 24-year Mateus Vinicius Alberto, investigators said.

The marking, King Coca 30, on eight of the 10 bags of cocaine is similar to the King Coca-branded 973 blocks of cocaine that had been seized in South Africa last year from aboard a Panama-registered fishing vessel.

Guyanese police were Sunday night also trying to ascertain where was the intended destination of the plane, which bears what appear to be United States registration markings,  N5470Z. Police said the aircraft landed at the Mahdia airstrip at about 2:20 PM Sunday and  “the ranks informed both men of their suspicion and afterwards, the suspects were arrested and taken into police custody.” 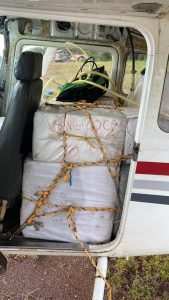 One of the bags of cocaine labelled “King Coca 30”

According to police sources, empty fuel drums were seen aboard the aircraft, suggesting that a precautionary landing was made to secure additional supplies of fuel.

In the past, several abandoned or crashed and burned illegal aircraft have been found in several parts of the interior of Guyana and Suriname.