‘I have not stepped down’- PNCR Leader David Granger 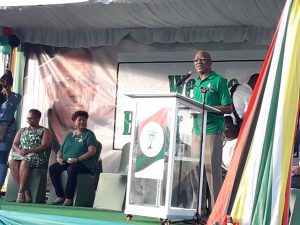 Leader of the People’s National Congress Reform (PNCR), David Granger said he has not stepped down, but has taken “temporary leave’ from the helm of his political party.

“I have not demitted office as party leader. I shall spend my vacation in Guyana,” he said.

In a letter to Central Executive Committee members, he made no mention of  his illness, unlike a note he sent on August 31, 2021 to certain key party members in which he specifically mentioned “health reasons” for his decision to take a “brief vacation.” In that note he alluded to his diagnosis with Non-Hodgkin’s Lymphoma and that “I have not recovered fully.”

Instead, in his letter to the Central Executive Committee he said he was taking “temporary leave of absence”  because he needed to rest and deal with “personal matters”. “I had a steady governmental work schedule as Leader of the Opposition and as President of Guyana for much of the past ten years. I have now decided to take this opportunity to proceed on leave so that I could enjoy a period of well-deserved rest and attend to personal matters,” he told the Central Executive.

His decision to go on leave comes at a time when the PNCR’s Central Executive Committee is yet to meet and discuss a report on preparations to hold congress virtually by November due to the coronavirus, COVID-19.

In his letter, he made no mention of Congress and said nothing about the person who would be performing the duties of leader in his absence. He said he could be contacted by the General Secretary, Chairman, Vice Chairman and other Central Committee members if required.

The PNCR’s Constitution provides for the Chairman, in this case Volda Lawrence, to perform the functions of the Leader in his or her absence.

2021-09-03
Denis Chabrol
Previous: GTT scales back use of Huawei mobile equipment
Next: GRA enforcement agents injured in shootout with smugglers