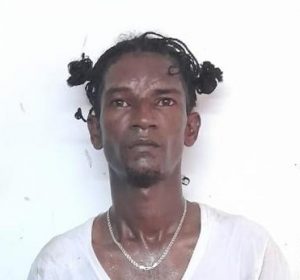 A man, who earlier this month entered the Whim Magistrates’ Court compound, and whipped out a cutlass while asking for Magistrate Renita Singh has been jailed for causing public terror.

Thirty-nine year old Julius Anthony Mootoo was also jailed for being in possession of an offensive weapon.

He pleaded guilty and was sentenced to 18 months on each charge.

Police said Mootoo entered the Whim Magistrates’ Court compound with a cutlass concealed on his person and posed as a person who was attending court to the sentry.

On entering, Mootoo brandished the cutlass while enquiring of the whereabouts of Magistrate Renita Singh.

Investigators were told that the clerk of court raised an alarm and summoned police who secured all the persons in the compound.

Police said Julius Anthony Mootoo was caught in possession of these two cutlasses.

He fled the scene, but was picked up by police on August 13 at Miss Phoebe, Port Mourant, Corentyne, Berbice.

After hours of surveillance, the suspect was seen armed with a cutlass.

Mootoo appeared at Whim Magistrate’s Court before Magistrate Mr. Ravindranauth Singh, where the charge was read to him and he pleaded guilty.

As a result, he was sentenced to two separate 18 months terms of imprisonment to run concurrently.