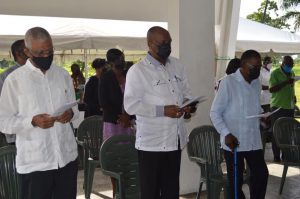 The Leader of the People’s National Congress Reform, David Granger on Friday hailed his party’s Founder-Leader Forbes Burnham as someone who forged party unity and took a hard line against division.

“We honour our Founder for reinforcing the solidarity of our Party by knitting groups together, not splitting them apart; by building up, not breaking down; by multiplying – not dividing and subtracting – membership and by suppressing schisms, factionalism and opportunism,” Mr. Granger said in a statement to mark Burnham’s 36th death anniversary on August 6, 2021.

His tribute to Mr. Burnham, who was Guyana’s first Executive President, came against the background of several party members- Aubrey Norton, Dr. Richard Vanwest Charles and possibly Volda Lawrence- preparing to wrest the PNCR’s leadership from him whenever Congress is held.  Mr. Granger has in recent weeks been fending off claims by anonymous sections of the Executive that he has been running the PNCR as a one-man show rather than consulting and respecting decisions.

Based on pictures posted by the PNCR on its Facebook page, several executive and prominent members who have expressed concern about Mr. Granger’s leadership did not attend the annual commemorative event at Seven Ponds, Place of Heroes at the Botanical Gardens.

The PNCR Leader highlighted on Friday that after Mr. Burnham was elected as Prime Minister in 1964 when he was 41 years, he immediately placed great emphasis on improving education, infrastructure; equality of women and ethnic groups and resisting threats to Guyana’s territorial sovereignty.

Under the PNCR, the Guyana Defence Force had taken against incursions in the New River Triangle that is still the subject of a border dispute with Suriname, and crushed the Rupununi Uprising.

Guyana has over the decades effectively used its diplomatic arsenal to aggressively resist Venezuela’s claim to the Essequibo Region. Guyana has since taken that border controversy to the World Court for settlement although Venezuela maintains that that United Nations body does not have jurisdiction to hear the case.

Guyana maintains that the 1899 Arbitral Tribunal Award is full, final and perfect in settling the land border with Venezuela.