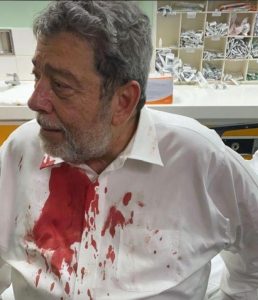 Opposition protesters hurled missiles at Prime Minister of St. Vincent and the Grenadines Dr. Ralph Gonsalves shortly after he exited his vehicle and was walking back to the Parliament, but Opposition Leader Dr. Godwin Friday dissociated himself from the attack.

Finance Minister Camillo Gonsalves told Parliament Thursday night that  his father was expected to be flown to Barbados for an MRI scan based on medical advice.

The Finance Minister, who was earlier Thursday night interrupted by an opposition parliamentarian on the grounds that his remarks were irrelevant, said,  the Prime Minister  “bleeds in a hospital.”  “Now, they want to stand here while a member of this Honourable House was attacked by a mob and is bleeding and pretend that they have the high ground,” he added.

The Finance Minister, who is the Prime Minister’s son, said he witnessed politicians instructing protesters to toss down police barriers in the vicinity of the Parliament. He said no one from the opposition has demonstrated leadership to speak out the escalating situation.

The House Speaker was under repeated pressure to bring order back to the Parliament as the Finance Minister continued to speak about the attack on his father.

Dr. Gonsalves was rushed to a nearby hospital and treated for a laceration to his head. Video seen by Demerara Waves Online News shows  security personnel struggling to hold up the Prime Minister as his knees buckled while walking.

Protesters nearby lit debris across a street.

One of the opposition lawmakers denied that he and his National Democratic Party (NDP) had instigated violence against the Prime Minister. “He is putting the people of St Vincent and his political party against me and putting my life in danger,” said the opposition lawmaker. Sources said the the public sector union was also involved in the protest. 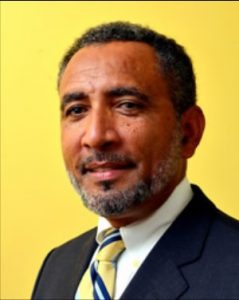 Leader of the Opposition NDP Dr Friday told the House that he dissociated himself from the attack on Prime Minister Gonsalves. “It is regrettable and it is something that I denounce. I do not encourage violence in any action that I am involved in. I do not support any act of violence against any member of this Honourable House or any person,” he said.

For several weeks now, opposition NDP supporters have been massing outside the Parliament to vent their frustration about poor governance, alleged corruption and other grievances.

Thursday’s protest by thousands of persons was held as Parliament met to, among other things, amend legislation to make vaccination mandatory for frontline workers.

Dr. Gonsalves is a former Chairman of the Caribbean Community (CARICOM). Last year March, he had been among a group of Caribbean leaders who had visited Guyana to help find a solution to the controversy over this country’s general and regional elections. He had also months later urged the then President of Guyana David Granger to “tak you licks like a man.”