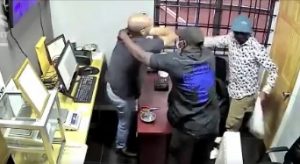 Several bandits on Thursday pretended to be gold miners, who had gone to sell raw gold to a licensed gold dealer.

Police said the bandits, instead, carted off GYD$38 million in cash and 60 ounces of raw gold valued GYD$20 million. They also stole one cellular phone valued GYD$300,000 and another
Cellular Phone valued GYD$60,000.

The security guard has been arrested, police said.

Police said that at about 10:05 AM Wallison Enterprise ,  Lot 23 Gordon Street Kitty Georgetown a 20-year-old female cashier and a 45-year-old goldsmith were robbed by three suspects who were wearing face masks and armed with handguns

The bandits entered the premises on Gordon Street, Kitty, Georgetown under the pretext of selling gold, but sources said a door was left open and more accomplices entered the room.

They calmly tied up Mr. Wazim Kassim who hails from Bartica. His hands were tied behind his back and he was escorted to the melting room and other areas of the building where the gold and cash were stored.

Sources said police have a number of “solid leads” that they are using to go after the perpetrators who escaped in a waiting car presumably with false number plates.

There were no immediate reports of injuries, the source said.

Police said the three suspects came with a white car and parked same north of the building and entered the compound, through the main gate, after indicating to the security guard that they were there to sell gold.

Police said the suspects then entered the waiting area where they spoke to the cashier and showed her a small package which they claimed contained gold to sell.

“Immediately after they drew their firearms from their pants waist pointed it at her and ordered her into an office where the money and gold were secured. At the time the other victim and another man were in the said office and they were held at gun point.

The suspects then ordered the victims to open the two metal safes after which they handcuffed the victims with plastic straps,” police said.

The bandits then reportedly locked the victims into one of the office and made good their escape.

The cashier said she  raised an alarm, after which the security immediately went to her rescue and kicked opened the office door.