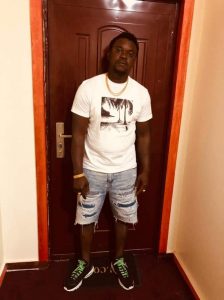 A 29-year old man was early this morning robbed of GYD$1.5 million worth jewwllery at a barbecue and shot as he was chasing the robber, police said.

Injured in the incident that occurredat about 2:15 AM at Alness Village, Corentyne is Dyameond “Tookman” McKenzie  of Brighton Village,  Corentyne,  Berbice.

Police said the bandit has not yet been arrested.

Investigators were informed that Mr. Mckenzie was at a barbecue dancing with a female when the suspect allegedly approached him from behind and grabbed his two gold chains valued at GYD$1,500,000 from around his neck, before running off.

“The victim ran behind the suspect, who eventually escaped through a clump of bushes, after firing three shots in his (the victim’s) direction, one of which hit him on his right thigh,” the Guyana Police Force said.