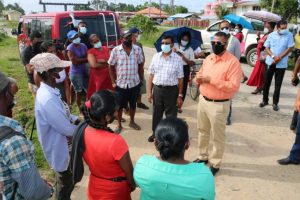 Minister of Housing and Water, Hon. Collin Croal engaging residents of Parika Back

Twenty-thousand residents of West Demerara are to benefit from improved water supply when two new wells are drilled before this yearend, authorities said.

The Guyana Water Incorporated (GWI) says one of the wells will be drilled in Lust-en-Rust, Parfaite Harmonie , West Bank Demerara to serve Lust-en-Rust, Recht door Zee and Onderneeming.

Housing and Water Minister Colin Croal says a water treatment plant will be constructed in the near future to accompany the well on the 5 acres of land allotted for its construction.

GWI Chief Executive Officer Shaik Baksh says the well will be drilled to a depth of 700 feet, at a cost of GYD$115M. The Lust-en-Rust, West Bank Demerara well, will be drilled at a cost of $115 million, benefiting some 12, 720 residents in that area, and neighbouring schemes including Recht door Zee and Onderneeming, the company said.

GWI says Parika Backdam has been identified for the drilling of the second well and this is expected to provide first-time access to potable water for close to 8,000 persons.