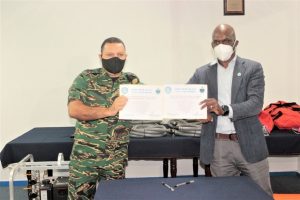 The Civil Defence Commission (CDC) has geared up the Guyana Defence Force (GDF) Coast Guard with GYD$50 million worth of equipment to respond to oil spills, and has urged that military corps to ascertain other needs in the areas of emergency response.

The CDC said some of the essential requirements handed over on Wednesday include 24,000 feet of containment booms, biological and chemical dispersants, hot pressure washer and personal protective equipment.

Lieutenant Colonel Michael Shahoud, Commanding Officer of the Coast Guard pointed out that the donation is very timely. “This puts us in a better position to address any instances (of an oil spill). This is a premier function for us, and the assets received today (Wednesday) allows us to be better positioned to deal with any eventuality. We will now focus on building our capacity and undergo additional training to utilise the equipment”.

Director-General of the CDC, Lieutenant Colonel Kester Craig urged the members of the Coast Guard “to carry out gap analysis exercises and capability assessments to determine additional requirements to execute its role.”

Mr. Craig recommended that an oil spill response vessel (OSRV) would be essential in the support of the agency’s role”.

President Irfaan Ali last month said a group of GDF officers was due to leave Guyana to conduct an assessment of available vessels to boost the capacity of the Coast Guard.

According to Lieutenant Colonel Craig, “the Guyana Defence Force Coast Guard has an invaluable role to play in the response to oil spill within Guyana’s territory. Being a member of the National Oil Spill Committee, the Coast Guard has the lead responsibility in oil spill response as guided by the National Oil Spill Contingency Plan. In summary, its roles entail on-scene command and control management, operational response, deployment and management of resources for containment, removal and disposal of waste, establishment of staging areas, provision of marine security and conduct of search and rescue operations”.

The mammoth task the Coast Guard should an oil spill occur, brings into focus the need for the entity to work closely with local and foreign companies in the Oil and Gas sector, the private sector, government agencies and other international counterparts to strengthen its capacity and foster an environment of collaborative response.

Lieutenant Colonel Craig said while the oil sector would benefit Guyana significantly, there are numerous risks associated with this industry, which could have severe impact on marine life and life on land particularly along the shorelines of some of our regions.

Lieutenant Colonel Kester Craig, in his remarks highlighted, “exploration, production, transportation, utilization and storage of petroleum products in on land territory and inland waters within the EEZ (Exclusive Economic Zone) increase the probability of spills occurring. Marine traffic, especially oil tankers and petroleum cargo vessels that transit along the river and coastal waters present risks of major spills from either collision, fire, explosion, or grounding. Pollution can also occur from vessels pumping their belch or illegally discharging oil. Pipelines, refineries and oil handling facilities also pose a great threat to both marine and inland environments”.

The agency said government , through numerous of its state-owned entities and the private sector, has been very proactive in developing Guyana’s national oil spill capacity and mechanisms to ensure that in the event of an oil spill Guyana is equipped to protect lives and our ecological systems. Recently, the CDC handed over a final draft of the National Oil Spill Contingency Plan (NOSCP) to the Government through the Office of the Prime Minister. Today’s ceremony is another step in building the country’s response capabilities and capacities to ensure that the right network is formed, the right resources are strategically positioned for quick and effective response in the event of an oil spill.

2021-04-01
Denis Chabrol
Previous: 64-year old man arrested while rolling suitcase of marijuana in Georgetown- CANU
Next: James Bond, others charged with conspiracy to defraud in lease of govt lands