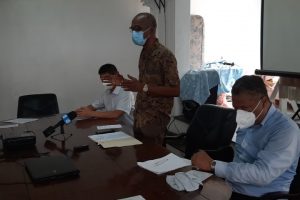 Minister of Labour Joseph Hamilton (centre) flanked by Chief Occupational Safety and Health Officer , Charles Ogle and an official of the Chinese Embassy.

Minister of Labour Joseph Hamilton on Sunday warned ExxonMobil and its contractors as well as other oil companies against paying Guyanese less than their foreign counterparts for the same jobs.

“I will deal with that issue because we have heard several issues that for whatever reason they are in our space and they bring people here and they are paying foreigners five times and ten times more than Guyanese,” Mr. Hamilton said.

Addressing a meeting of Chinese business owners at the Chinese Association headquarters, Brickdam, Georgetown, he said he has already put the American supermajor oil company, ExxonMobil, on notice that they and their subcontractors must desist from such an alleged practice. “I have said to ExxonMobil that they have a duty to their subcontractors, an obligation rather, to ensure that their subcontractors who operate in this space, they follow law because when you talk oil and gas, the only name that comes up with Guyanese people is ExxonMobil,” he said.

About three years ago, a number of Guyanese seafarers had complained to then David Granger-led administration and the Guyana Human Rights Association about not being hired by a sub-contractor and in a number of instances being paid less compared to their counterparts from Trinidad and Tobago, and other countries. But Mr. Hamilton, who was appointed minister of the recreated Labour Ministry after his People’s Progressive Party (PPP) was declared winner of the March 2, 2020 general and regional elections, said workers in Guyana  would have to be paid the same wages and salaries. “I would not allow it whereby we grade people based on ethnic origin or based on where they belong. I have said that to the major oil companies and that is a special project. It is only time,” he said. 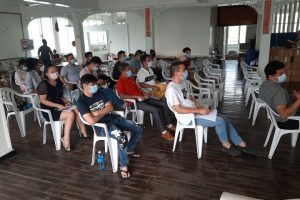 Members of the Chinese business community meeting with officials of the Ministry of Labour.

Mr. Hamilton also urged Guyanese not to discriminate against workers based on their ethnicity or country of origin. “Once a worker that is in this space called Guyana, they have to be treated based on the labour laws based on the Cooperative Republic of Guyana, whether they speak Spanish, Portuguese or Mandarin; that is what the law says and we hope that everyone pays attention to the law,” he said.

The Labour Minister said his ministry has over the past several months increased enforcement arms by increasing the number of Occupational Safety and Health Officers and Labour Officers to ensure businesses comply with the relevant laws.

Businesses would be expected to make fair returns on their investment but, according  to him, not by business owners breaking the law.