AFC hit by second resignation in less than one month 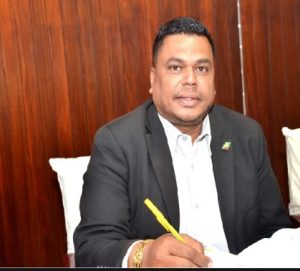 A senior member of the Alliance For Change (AFC) has resigned, bringing to two the number of members to have resigned from that party in less than one month.

The latest member to quit from the AFC is Attorney-at-Law, Joel Persid-Edmond.

In his resignation letter dated February 20, he told AFC General Secretary David Patterson that he was resigning with immediate effect.

Mr. Persid-Edmond gave no reason for his resignation, but he told News-Talk Radio 103.1 FM/Demerara Waves Online News that “the AFC has lost its vision along the way.”

“I thought that after 2020 the AFC would have regrouped and get back on its mission but to no avail,” he added.

Mr. Persid Edmond says this means that he has completely withdrawn his support from that party and by extension his total dissociation with the coalition of A Partnership for National Unity+Alliance For Change (APNU+AFC).

He says his departure from the AFC does not mean the end of his political career as he intends to fight for the true sense of democracy in Guyana. Asked if he planned to join the governing People’s Progressive Party (PPP) or one of the small political parties, Mr. Persid-Edmond said “not too sure yet.”

About two weeks ago, AFC member Reynard Ward resigned, saying that that party has become a puppet of the People’s National Congress Reform-dominated APNU.

AFC Leader Khemraj Ramjattan and Mr. Patterson have since rejected that claim. AFC Executive Member, Catherine Hughes has said that more persons have been signing up for membership of her party.

Mr. Persid-Edmond is a former member of the governing Board of the Guyana National Broadcasting Authority. His wife, former Magistrate Geeta Chandan-Edmond, was a senior functionary in then Minister of State, Joseph Harmon’s Secretariat. She is currently the APNU+AFC’s Shadow Minister of Home Affairs.