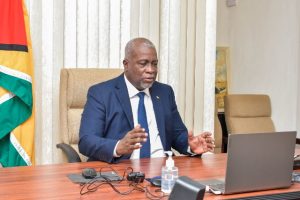 The Guyana government has issued an exemption order to expedite the licensing process for small internet providers, in keeping with its efforts to expand the telecommunications sector.

Prime Minister , Retired Brigadier Mark Phillips made this disclosure during his guest appearance on NCN’s “Budget in Focus” on Friday.

” I have signed an exemption order that is linked towards 50-odd local small internet service providers. This will prevent them from having to go through a long process to be granted a licence. They just have to register and pay the necessary fees associated with the service.

These are the small providers who will buy and sell services and are going the extra mile, especially in the areas where the big companies may not necessarily want to go,” he said.

This would provide access to internet services to more persons in communities across the country who were not able to connect previously, from a range of operators, government’s Department of Public Information (DPI) reported.

Zoning in on hinterland telecommunications connectivity, Prime Minister Phillips said the Government is aiming to connect 200 hinterland communities in 2021. He said a significant sum of money was allocated to make this a reality.

“I will tell you that money was available before we came into office, but nothing was done. We are now utilising that money to ensure that we roll out the ICT services to all the communities.”

The Prime Minister noted that while a lot of prior work was done in some communities, the complaints of inadequate service and ICT hubs not functioning remain the same.

“Almost every day … got a letter from some community that is requesting assistance to have their ICT hub repaired or otherwise installed. So, the NDMA [National Data Management Authority] will be very busy in 2021, ensuring that ICT connectivity becomes a reality,” he said.

Just two months after taking office, the Government liberalised the telecommunications sector and issued licenses to three big service operators: GTT, Digicel and E-Networks. Since then, there have been requests for the amendment of licence. Prime Minister Phillips said to accommodate the industry’s expansion, these requests have been facilitated.

“These agencies have identified the amendments that are necessary for them to expand their services and we’ve gone through the process of assuring that those amendments are granted for their expansion.”

The Prime Minister said the Government has an open-door policy for international companies wanting to enter the local telecommunications market. He said to date, they have received Expressions of Interest from three companies.

2021-02-20
Denis Chabrol
Previous: Youth robbed at gunpoint while in virtual classroom
Next: AFC hit by second resignation in less than one month