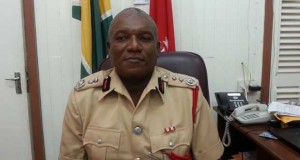 Fourteen firefighters, who work at the Melanie Damishana Fire station, are in isolation after one of their colleagues tested positive for the coronavirus, COVID-19.

The infected firefighter is stationed at the Melanie Damishana fire station. According to Mr. Gentle, the crew at Melanie was tested but none of them has so far been registered as positive.

That firefighter was at a celebratory event after the inauguration of President Irfaan Ali.

He says the isolation period for the firefighters will end on Thursday of this week.

The Guyana Fire Service says there is a contingency plan to ensure the Melanie Damishana Fire Station is adequately manned although the firefighters are isolated.

The Fire Chief says this is the third such instance in which firefighters and ambulance personnel have been isolated but they have all been tested as negative.