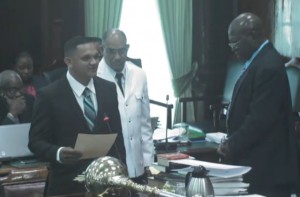 The Guyana government has decided to scrap the prequalification process in a fresh round of request for proposals for a company to sell the country’s crude oil from the Liza Phase One well.

The request was published in notices published in the daily newspapers by the Department of Energy of the Ministry of Natural Resources.

Minister of Natural Resources , Vickram Bharrat told News-Talk Radio Guyana 103.1 FM / Demerara Waves Online News that the new arrangement would allow for greater transparency. He said in addition to the National Procurement and Tender Administration Board (NPTAB), there would be an independent team of assessors to decide who should. “I think it will bring more transparency to the process…That’s we are re-tendering and we are having an  independent assessment team besides the Tender Board,” he said.

Interested companies have until September 22, 2020 to submit their proposals to the Chairman of NPTAB.

Mr. Bharrat said the independent team would remove any role for the Minister of  Natural Resources or the President in selecting the company to sell Guyana’s oil. He said during the one-month tendering process, government would pick the team members. He said eventually the names would be released to the public once the team members are identified.

Top government sources believed that certain companies were picked preferentially to eventually make way for one to be selected.

The successful company will have to provide support to the Ministry of Natural Resources’ Department of Energy in all operating and back office responsibilities of managing these crude sales of each individual lift, work closely with the Department in understanding the behaviour and yields of the Liza Blend and how these affect pricing differentials, and advocating for any operational considerations that may affect the pricing of the crude. The company will also have to train the Energy Department’s staff in matters relating to crude oil supply and trading fundamentals and those relevant to the Liza crude pricing.

Bidding will be conducted through the International Competitive Bidding procedures of the Procurement Act.

In the now scrapped Expressions of Interest process, the previous A Partnership for National Unity+Alliance For Change (APNU+AFC) had seen 34 companies stating that they had wanted to do so. But the People’s Progressive Party (PPP) administration, which came to power in August  2020 after the disputed March 2, 2020 general and regional elections, has decided to abandon that process. Vice President Bharrat Jagdeo is on record as saying that it was illegal for the companies to have done such business with an illegal government as a result of the passage of a no-confidence motion in December 2019.

The Caribbean Court of Justice (CCJ), in validating the no-confidence motion, had said the David Granger-led administration had assumed a caretaker role.

Among the 34 companies that have expressed an interest to transport and sell Guyana’s oil to the United States and Asian markets is ExxonMobil which is the only company that has so far found oil, totalling 8 billion barrels, in commercial quantities offshore Guyana.

Shell Western Supplies and Trading, which had been hand-picked by government to market Guyana’s first one million barrels of oil, is also hoping to win this competitive bidding process.

Under the previous arrangement, the 34 shortlisted companies would have been evaluated and then asked to submit detailed bids.

2020-08-23
Denis Chabrol
Previous: Lusignan Prison to be expanded
Next: Tabitha Sarabo-Halley resigns from WPA amid party’s spat with Granger over parliamentary selection