Lusignan Prison to be expanded 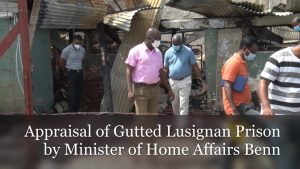 The Lusignan Prison, where there have been untests including a recent devastating fire, is to be expanded as a priority project, authorities said.

“High on the agenda will be the construction of additional areas so that social distancing can be practiced, and better supervision and management of the prisoners can be conducted,” the Guyana Prison Service said in a statement.

The decision was made known during an unexpected visit by Home Affairs Minister Robeson Benn on Saturday.

At the time of the Lusignan Prisom fire on July 12, 2020, there were 284 prisoners. The daily average population  at that location is 555 at the holding bay and 55 at the Lusignan prison.

During Benn’s visit, he saw  firsthand the holding bay, the burnt Lusignan Prison, and the COVID-19 isolation facility.

The Minister was briefed by the Director of Prisons and by the Officer-in-Charge Holding Bay Senior Superintendent of Prisons (ag), Deoraj Gyandat on the administration of the prison population, security challenges, COVID-19 initiatives among other pertinent issues.

The Prison Service said  Minister Benn also visited the kitchen area and the livestock sections and was provided with some insight into what can be achieved if requests for additional land and other resources are approved.

He was also brought up to date on the current status for court hearings at the various levels – Magisterial, High Court and Court of Appeal.

“The Minister expressed his concern that the conditions he observed were very unsatisfactory. With this the Prison Directorate concurs,” the Prison Service said.

The Minister reportedly committed to working with all concerned to bring measurable improvements, not only to Lusignan, but also to the Georgetown, Mazaruni, New Amsterdam and Timehri Prisons on a timely basis.

The Prison Setvice says this will be pursued to ensure better public safety, a more secure environment for the prison population, improved rehabilitation, and safer and less stressful working conditions for the prison officers and staff.