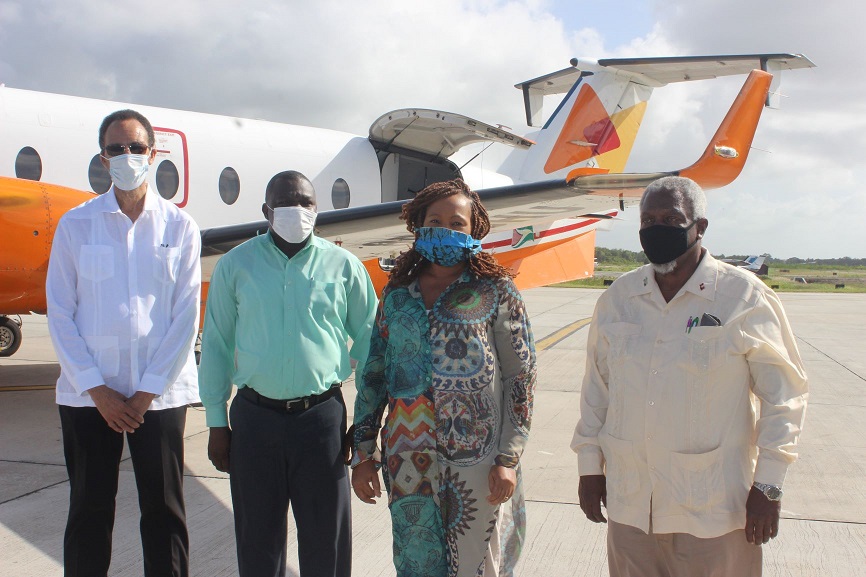 Canada is footing the bills for the Caribbean Community’s (CARICOM) three-member team of scrutineers, who arrived here Friday afternoon, to scrutinise the national recount of votes cast in the March 2, 2020 general elections, Canada’s Ambassador to the regional grouping, Lilian Chatterjee said.

“With the borders being closed and commercial flights not being an option, we covered the cost of a chartered flight… so we funded their transportation cost and for the duration of their time here  in Guyana and we are very, very pleased to support them,” she told News-Talk Radio Guyana 103.1 FM/ Demerara Waves Online News

Chatterjee, who is also Canada’s High Commissioner to Guyana, remained unimpressed by the resort to court for a legal review of the Guyana Elections Commission’s previous attempt to conduct a  CARICOM-supervised recount of the ballots based on an informal agreement between President David Granger and Opposition Leader , Bharrat Jagdeo.

Chatterjee declined to say how much Canada was spending on the Trans Guyana charter flight that  picked up the scrutineers from Antigua, St. Vincent and Barbados on Friday as well as costs associated with their stay for the duration of the 25-day recount.

The High Court seemed to have hinged its decision against the recount that GECOM could not delegate its responsibilities such as management and supervision of elections to anyone else. “We were very, very, very disappointed that the CARICOM team left because of a frivolous injunction that fortunately the courts dismissed and… we are disappointed by the long delay in the recount but we are glad that it’s finally happening and we are impatient and eager for the recount to happen in a transparent and democratic way,” the Canadian envoy said.

However, observers have noted that the Guyana Court of Appeal’s ruling was pegged on GECOM press release that had used the word “supervision” instead of the Granger-Jagdeo aide-memoire that had guaranteed GECOM’s constitutional independence.

Asked whether she was convinced that the recount would be conducted smoothly, the Canadian High Commissioner said she trusted the competence of the CARICOM team and regional leadership. “In the end, I would say that I am a democrat and I believe in democracy,” Chatterjee said.

Chatterjee said Canada is a friend of CARICOM  and wants to see democracy flourish; that being the sole reason for financing the arrival and stay of the regional team of scrutineers. “You know that Canada is a big believer in the rule of law and democratic governance and we were more than happy to support CARICOM in this important role,” she said.

The Canadian High Commissioner welcomed CARICOM for being “very engaged in this process” including facilitating the landing of the flight in light of travel restrictions. “I think the citizens of Guyana should really thank CARICOM for this, especially this team because it’s a big sacrifice to ask them to come for an extended period of time under these circumstances but they have come and they have come because they believe in democracy and do not underestimate the contribution they are making,” she said.

The three-member Team is led by Ms. Cynthia Barrow-Giles, Senior Lecturer in the Department of Government at the University of the West Indies (UWI), and includes Mr. John Jarvis, Commissioner of the Antigua and Barbuda Electoral Commission and Mr. Sylvester King, Deputy Supervisor of Elections of St. Vincent and the Grenadines.  They were met on arrival by the CARICOM Secretariat’s Assistant Secretary-General for Foreign and Community Relations Ambassador Colin Granderson.

The Canadian envoy had come in for harsh criticism back in 2018 because Guyanese- Canadian, Charrandass Persaud had successfully sought Canada’s assistance in leaving Guyana less than one day after he had voted for an opposition People’s Progressive Party (PPP)-sponsored no-confidence motion.

After a long-running legal battle by pro-coalition litigants, the Caribbean Court of Justice (CCJ) last year ruled that the motion was validly past by a majority of 33 to 32 in the 65-seat National Assembly and although Persaud had been a parliamentarian in violation of Guyana’s constitution, the said supreme law had preserved decisions made by the House while he had been a member.