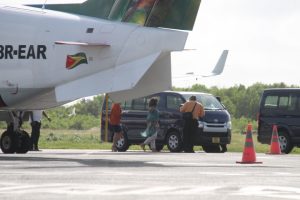 Team will be led by Ms. Cynthia Barrow-Giles, Senior Lecturer in the Department of Government at the University of the West Indies (UWI) about to board a CARICOM bus at the Eugene F. Correia International Airport.

The Chairman of the 15-nation Caribbean Community (CARICOM), Prime Minister Mia Amor Mottley on Friday called on Guyanese stakeholders to ensure there is proper recount of votes cast in the March 2 general elections or the government would not be regarded as legitimate.

“The Community calls on all concerned to ensure a credible and transparent recount process, in order to provide legitimacy to any government which would be sworn in as a result. This process must be completed without further delay,” said Mottley, the Prime Minister of Barbados, in a statement.

The CARICOM position appears to be in line with concerns about transparency and credibility  of the elections by the Regional Mission that had observed the polls.

Previously, she had said there had been “hidden forces” that had caused the recount in March to be aborted.

The CARICOM Chairman thanked Canada “for the generous support it has provided to CARICOM for this initiative.” Canada’s  High Commissioner to Guyana and CARICOM, Lilian Chatterjee on Friday said Canada financed the Trans Guyana charter flight to bring the team to Guyana as well pay for their extended stay. The recount of the more than 400,000 votes at the Arthur Chung Conference Centre is expected to take at least 25 days at 11 hours per day.

The three-member Team will be led by Ms. Cynthia Barrow-Giles, Senior Lecturer in the Department of Government at the University of the West Indies (UWI), and includes Mr. John Jarvis, Commissioner of the Antigua and Barbuda Electoral Commission and Mr. Sylvester King, Deputy Supervisor of Elections of St. Vincent and the Grenadines.

The Trans Guyana Airways Beechcraft first flew to Antigua for Jarvis, then to St.Vincent for King and to Barbados for Barrow-Giles before returning to Guyana.

The team was greeted by CARICOM Assistant Secretary-General, Colin Granderson.

Ms. Barrow-Giles was a member of the High-Level Team that came to Guyana last March to participate in a scheduled recount which had to be aborted. The other members of that Team are unavailable for the present mission.  Both Mr. Jarvis and Mr. King participated in the CARICOM Electoral Observer Mission for the Elections held on 2 March 2020.