Ramjattan assures any elections violence will be quelled; smooth transition if PPP wins; Rohee warns “be careful with the guarantees you’re giving” 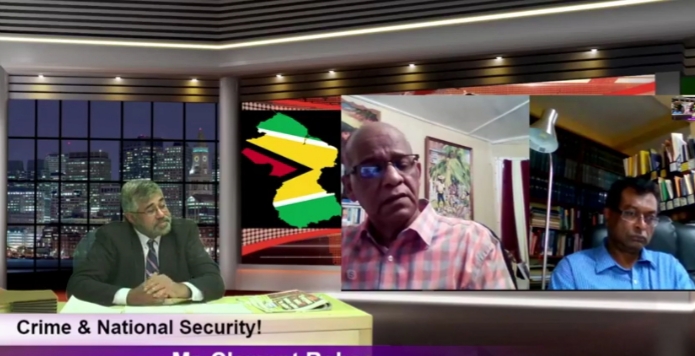 Public Security Minister, Khemraj Ramjattan has promised that police would not shoot any protesters and would instead do all it can to maintain peace during and after elections including a smooth change of government if the opposition People’s Progressive Party (PPP) is voted back into office.

“We gonna try as best not to shoot protesters, as has happened in the past, and we are going to do as best possible to persuade them to enjoy their constitutional right of assembly and protest in a very peaceful fashion,” Ramjattan said during a live Internet link-up town hall meeting on GlobeSpan on the topic “Crime and National Security”. He shared the session with former Minister of Home Affairs, Clement Rohee.

Ramjattan said if there is elections-related violence, the police force, possibly with support from the Guyana Defence Force, must restore law and order in keeping with Guyana’s constitution and laws. “If it takes on criminality proportions, we are going to put a halt to it and that will be the obligation of a Minister of Public Security and a Commissioner of Police,” he said in response to a question by the moderator, United States-based Political Science Professor, Baytoram Ramharack.

Ramharack, a strong supporter of the pro-East Indian Rise Organise and Rebuild (ROAR) political party, firmly believed that based on previous elections, there would be post-elections violence if the PPP wins the next general elections which might be held this year.

If the PPP wins the next general elections, Ramjattan said incumbent President David Granger and the rest of the Cabinet were committed to ensuring that the administration changes hands smoothly. “We are gonna do everything at our disposal that is possible to ensure that this country does not go over the brink and whatever it takes for me, as minister with our police force, to ensure law and order, we certainly will do and there will be a smooth transition if the PPP wins.

That is what I’m absolutely certain that my President will want and the larger body called the Cabinet, although we these days call it Ministerial Plenaries to ensure that we do not defy the Court Order,” he said in reference to the High Court’s decision that the President and Cabinet should have resigned following the National Assembly’s passage of the no-confidence motion on December 21, 2018.

Guyana saw its worst post-elections violence in 1992 when the People’s National Congress was voted out of office in internationally-certified free and fair elections for the first time since 1964. Mostly Indo-Guyanese were beaten and stores in Georgetown’s commercial district were looted.

Ramjattan, however, believed that Guyana has improved since the 1992 and 1997/1998 post-elections violence and indicated that Professor Ramharack’s concerns about a repeat after the next elections were misplaced. “I do not believe we have not evolved from those days. I think we have evolved…We have evolved from those days and I rather suspect that your concerns as to the future, if there is a PPP victory, are not well placed and very much unsubstantiated but even if it happens, we in the Ministry of Public Security and from the Ministerial Plenary and at at presidential level will ensure that there be law and order,” he said.

Former Home Affairs Minister Rohee, however, disagreed with his immediate successor after the May 2015 general elections. He cited examples such as the Granger-led administration back-pedaling on its commitment to honour Guyana’s constitution as a result of the passage of the no-confidence motion by 33 to 32 votes. “The point I’m making is this: How can you believe what Mr. Ramjattan is saying? How can you give the necessary trust to such a statement when, from a practical point of view, there has been a number of examples where assurances had been given and lo-and behold…,” he said. Rohee also cited an agreement by the then opposition to lower the electricity subsidy to residents and businesses in Linden, but had later withdrawn its support resulting in violent protests.

Rohee admonished Ramjattan, “you got to be careful with the guarantees you’re giving” to which the Public Security Minister responded sharply. “That is as far as I can go. If you distrust me on that, there is no where we can go further than that,” he said.

President Granger has asked the Guyana Elections Commission (GECOM) to begin preparations for holding general and regional elections in 2019.