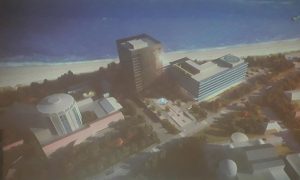 An artist’s impression of the planned Pegasus Corporate Suites and luxury accommodation to be constructed just east of the existing Pegasus Hotel.

As the Pegasus Hotel prepares to construct a US$100 million Corporate Centre and Suites, its owner Robert Badal Thursday night urged government to stop taxing start-up investment projects heavily as they seek to enter the marketplace and contribute to Guyana’s growth and development.

Minister of Business, Dominic Gaskin, agreeing with Badal that taxes are a disincentive for businesses to invest here, said extending and modernising Pegasus Hotel marked a jump-start for Guyana to cater for 500,000 visitors annually by 2025.

The seven-storey state of the art office complex and a 15 storey tower that will offer luxury accommodation will be built by China Harbour Engineering (CHEC), targeting mainly the lucrative oil and gas operators

Addressing a reception to mark the launch of the project that would be built immediately east of the existing Pegasus Hotel, Badal said the 20 percent withholding tax on foreign contractors for large capital projects. “I believe that our country’s fiscal regime itself needs to be more supportive and needs urgent reform.The withholding tax on capital projects like this needs to be removed regardless of the country’s origin of the contractor. In fact, there should be no withholding tax at all,” he said. Badal said consultancies, booking agents, TripAdvisor and interest payment on loans to non-residents are subjected to a 20 percent withholding tax.

Badal questioned why businesses should be taxed before they have started operations.  He noted that the property tax on the office complex and luxury hotel would amount to more than US$500 million annually. “What is the rationale of having to pay taxes on a company’s income and then pay property taxes on the very asset that generated that income?

There need to be some fundamental changes because these all add to the capital costs that affect a project’s viability. It is not good policy to tax what does not exist or what is being built. A project needs to be nurtured and strengthened until it becomes profitable and generates free cash flows, not being linked to taxes,” said Badal, an ardent supporter of the Alliance For Change (AFC) which is part of the governing coalition. He estimates that when completed, the new addition to the Pegasus Hotel complex would inject more than GY$200 million in Value Added Tax at full capacity.

Responding to Badal’s observation about the tax regime, the Minister of Business admitted that investors need tax breaks but government was reluctant to give up revenues especially since there is a national budget deficit. “I do agree that taxing investors upfront is not the best way of stimulating investment,” he said. Gaskin called for more dialogue on taxation while at the same time he cautioned that government could not rely on revenues to run Guyana.

He suggested that government should provide incentives to investors instead of eliminating taxes. “It doesn’t mean giving away tax revenues. It has to be studied, analyses have to be done to ensure it becomes an investment on the part of government.