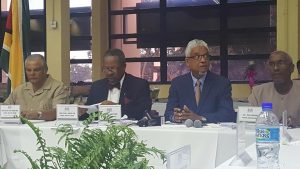 The University of Guyana (UG) appears one step closer to virtually removing political influence in running its affairs, something that top officials on Thursday said  has not helped in running the institution efficiently and effectively.

Among them is to have a smaller and independent Council with no place for representatives of political parties and organisations because over the years there has been too much political intrusion in managing the affairs of UG. “That is the intent. The intent is to reduce the vulnerability of the university’s operation to political intrusion into the management,” added UG Vice Chancellor, Professor Ivelaw Griffith at the end of the Council’s first Annual Business Meeting.

The Chancellor added that the reformed Council would include representatives from the Ministry of Education and the Ministry of Finance, but none from political parties. “We want to do way with the whole question of representation of political parties and a number of other entities. We have other mechanisms, if you will, that are being proposed by which we can get input from the broad base Guyana community without the particular specifications that exist in the Act that now exist. We really want to de-politicise it, if you will,” said Professor Harris, a former Vice Chancellor of the University of the West Indies. 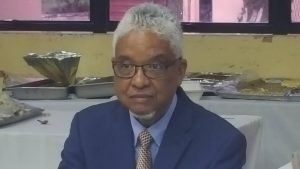 Chancellor of the University of Guyana, Professor Nigel Harris.

Also to be revisited are the roles of the Chancellor, Pro-Chancellor and Vice Chancellor with the aim of having a more efficient and effective university and “still in fact more accountable” to the people and government of Guyana. If the new governance regime is approved by government, Harris said the publicly-funded tertiary institution would be accountable to Guyanese and the government through the tabling of annual reports in the National Assembly.

“One of the problems that existed previously- and this happens with a number of other State universities in the world- the separation between oversight and management is not always there and on occasion, the oversight gets involved in university business that is to the detriment of the university,” he said.

Asked what is wrong with the current formula of appointing the 26-member Council, the Chancellor said that governing body of that more than 50-year old institution had been “politicised”. “Indeed, political biases, if you will, did not only affect the affairs of Council but they did other management decisions within the context of the university and what we are trying to do is…we first want to ensure that whatever we create that we remain responsible to Parliament and to the Guyanese people,” Professor Harris said. UG, he said, requires Council members who have the abilities and skills that could contribute meaningfully to governance, strategic planning, financial management and accountability, and policy making.

“One really wants to be able to identify and bring individuals, who on a general corporate board, you try to get the best talents that can contribute to the running of the organisation rather than saying we designate particular political groups to be represented because that has not served the university as well as it can,” he added.

After consultations are held on and off campus, the proposed legislative amendments, Harris said, are expected to pass through the Minister of Education and the Attorney General to Parliament for approval.

Noting that the University of Guyana Act has not been revised “in any major way” since the institution was formed in 1963, Harris said that for the past 18 months the Carrington Committee has been revisiting the laws and regulations to make them modern to allow for the efficient and effective running of the institution.