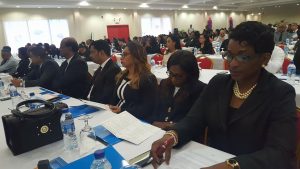 Attendees and participants at the Guyana Oil and Gas Law Training Development Conference.

Guyana’s fast-tracking of the start of oil production in 2020 was part of a broader plan to stamp its sovereignty on the location of the Liza field that Venezuela had claimed as hers, Natural Resources Minister Raphael Trotman said Friday.

Addressing the opening of the Guyana Oil and Gas Law Training Development Conference, he noted that on May 26, 2015 Venezuela’s President Nicolas Maduro had, by Decree, unilaterally extended his country’s maritime boundary to take in the Liza field that is located more than 120 miles off Clonbrook-Mahaica. Liza contains more than two billion barrels of “high quality” recoverable oil.

Trotman emphasised that it was important for Guyana to quickly begin oil production to solidify its right over that area before the International Court of Justice (ICJ) to which the border controversy with Venezuela has been referred. “Because of the redrawing of the line by Venezuela, it was important for Guyana to move to production as quickly as possible so that it can assert when we got to Court that production is taking place within the territorial waters of Guyana. That would become an indisputable fact for a Court of Law,” said Trotman, also a lawyer by profession. 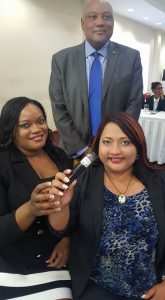 Deputy Dean of the Faculty Law of the University of the West Indies, Alicia Elias-Roberts and Senior State Counsel at Trinidad and Tobago’s Ministry of Energy and Energy Industries, Indira Rampaul-Cheddie hold a sample of the “light-sweet crude” that has been found at the Liza well offshore Guyana. Also present is Minister of Natural Resources, Raphael Trotman.

The Natural Resources Minister contended that if there was no production, it could be a matter of dispute of where the oil was located.  He reasoned that it was no coincidence or happenstance that the oil was discovered in commercial quantities, Venezuela’s unilateral maritime boundary extension, fast-tracking of production by 2020 and the referral of the controversy to the World Court. Through the 15-nation Caribbean Community (Caricom), Venezuela eventually pulled back its maritime boundary delineation.

To date, ExxonMobil has found seven commercially viable wells that have pushed Guyana’s oil production to 500,000 barrels per day.

In apparent reference to the controversy over the Production Sharing Agreement between Guyana and ExxonMobil that provides for a two percent royalty and a 12.5 percent profit, he said that contract was not materially different from those with CGX Energy, Ratio, REPSOL, JHI Associates and other companies. “Exxon did not bring a contract to Guyana and say to us ‘take this’. We used the updated model that the GGMC (Guyana Geology and Mines Commission) and the government of Guyana had in place and had already advertised on its website to be updated so it was the Guyana model that was used,” he said.

The Guyana Oil and Gas Law Training Development Conference, which is being held under the theme ‘Exploring the Legal Framework in Oil and Gas Law’ at the Ramada Georgetown Princess Hotel, is organised by the Guyana Bar Association and the judiciary.

The main presenters are Deputy Dean of the Faculty Law of the University of the West Indies, Alicia Elias-Roberts and Senior State Counsel at Trinidad and Tobago’s Ministry of Energy and Energy Industries, Indira Rampaul-Cheddie.