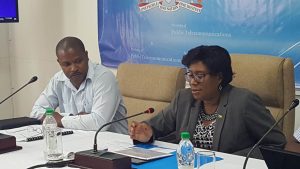 The National Telecommunications Agency (NATA), which will be responsible for spectrum management and licensing of wireless communication service providers, is about to be established but liberalisation of the telecommunications sector is largely hinged on the settlement of a US$44 million tax claim against the Guyana Telephone and Telegraph Company (GTT).

GT&T continues to maintain that it enjoy a monopoly on international voice and data services until 2030.
Public Telecommunications Minister, Cathy Hughes said  last Friday her ministry’s representatives had a “very fruitful engagement” with the Commissioner-General of the Guyana Revenue Authority (GRA) on the “progress his agency is making with regards to the negotiations”.
“At the end of the day, the GRA- Guyana Revenue Authority- and the Commissioner-General have wanted to make sure they are covering all their bases from the financial end, from taxes that would have been paid, from things that could be offered to the sector as a whole and, therefore, the focus is not on getting this done in the shortest space of time but making sure that we come up with an end game that suits everyone and the government is extremely careful in ensuring that we come up with a deal that we are happy with,” she said.
At the same time, she said she was not aware of the details of the tax matters and referred queries to the Ministry of Finance or the GRA.
Under Guyanese laws, tax information is confidential but the phone company  in its 2016 Annual Report states that GTT is also involved in several legal claims regarding its tax filings with the Guyana Revenue Authority dating back to 1991 regarding the deductibility of intercompany advisory fees as well as other tax assessments.
The report states that should GTT be held liable for any of the disputed tax assessments, totaling $44.1 million, the Company believes that the Government of Guyana would then be obligated to reimburse GTT for any amounts necessary to ensure that GTT’s return on investment was no less than 15% per annum for the relevant periods.
The Minister of Public Telecommunications  announced that she last week Friday signed the commencement order for the establishment of NATA  with effect from January 19, 2019 to allow for the smooth transition from the National Frequency Management Unit (NFMU). “The objective of establishing the agency now is to give time to put in place certain administrative arrangements that are necessary for the agency to function effectively when the entire act comes into place,” she said.
Consultant Andre Griffith added that a comprehensive draft of the “a lot of the governance instruments” that the board would “review, refine it and maybe amend it”.  The NATA would be responsible for taking policy directions from the minister and advise the minister.
With the final report on spectrum management now in, she said “we are working with haste on the pricing structure”. Preparations include mechanisms for NATA’s human resource management, financial management, rules of procedures, licensing monitoring and enforcement in keeping with the 2016 Telecommunications Act.
Wary of naming yet another deadline for liberalisation, the Minister said her ministry was continuing to meet with Digicel and Atlantic Tele-Network (ATN) about licensing terms and liberalisation.