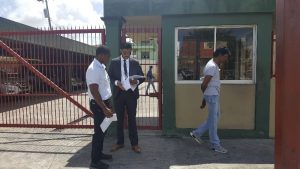 A High Court Marshal and one of Maurice Arjoon’s lawyers outside NBS.

High Court Marshals and police were Tuesday levying on the assets of the New Building Society (NBS), Guyana’s premier mortgage institution, to the amount of GY$59 million.

That is in keeping with a High Court decision that former NBS official,  Maurice Arjoon, should be compensated for wrongful dismissal.

Customers and other persons were prevented from entering the NBS headquarters after guards were ordered to lock the doors. Marshals, police and lawyers were among those locked inside.

An official later informed a policeman through a crevice that the doors would be reopened after a quantity of cash is secured. 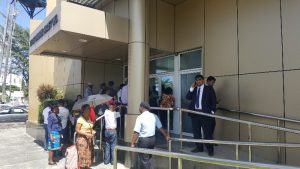 Customers outside the NBS headquarters after guards were ordered to lock the doors. Marshals, police and lawyers were among those locked inside.

One of Arjoon’s lawyers told Demerara Waves Online News outside NBS on Company Path and Avenue of the Republic that already one vehicle has been removed and another expensive one was likely to be taken away.  Furniture and other assets are also expected to be removed.

A truck was on standby to collect items that would be seized. A man was seen placing a sledgehammer and an axe in the truck pending further instructions.