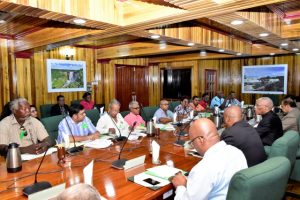 President David Granger and his ministerial delegation meeting with top officials of the Guyana Agricultural and General Workers Union and the National Association of Agricultural , Commercial and Industrial Employees on January 19, 2018 to discuss the state and future of the industry following government’s decision to close several estates and send home more than 4,000 workers with effect from December 31, 2017.

The opposition People’s Progressive Party (PPP) on Friday said now it has failed to pressure government into keeping several Guyana Sugar Corporation (Guysuco) estates opened and avoid sacking 4,000 odd workers, it would keep up the pressure on protecting workers’ rights in any privatisation deal.

Jagdeo said the PPP would support any initiative with “decent investors” to get jobs for sugar workers, adequate land, more cash for small loans, immediate payment of accurately calculated of severance.

“This is a national matter. It is not a partisan one. It involves human beings, households and families. We are conscious of the foresighted nature and we cannot ignore the context of the issue that we face. We cannot continue something that is not competitive. We are bailing out the industry at $1B per month and that is simply not sustainable. If workers have to go home then we all lose, as it will have an impact on the economic growth of the country. Government will not win, the Unions will not win and the workers will not win if the industry is crippled. We will all lose. Nobody is against the sugar industry. The Government and the Unions should engage until the issue is resolved. Let us use this opportunity to show flexibility and ensure that livelihoods are saved,” Granger was quoted as saying in a Ministry of the Presidency statement.

“We have listened and we are satisfied that you are concerned with the issues. We are ready to work along with the Government to explore the options and we are going to give our best to see the situation out. You are right that there are no winners in this and we are willing… We are certainly pleased with this meeting. This is the first meeting [for the year] we have been able to have with the Government and we believe that the meeting took place in a positive atmosphere and we recognise that the Government itself pays attention and I think that it is a good beginning. That is certainly important ground rule that we dialogue, that we talk and try to find an answer for the way forward. We are pleased. From GAWU, we are very pleased and it spells out that the future engagement are in the interest of the workers, the industry and the country,” GAWU President, Komal Chand was quoted as saying in a Ministry of the Presidency statement.

GAWU said the meeting ended with the parties agreeing that a line of communication would be established between the Unions and the Government, through the Minister of State.  GAWU felt that the meeting was fruitful though it believe it should have been held earlier.

With regards to government’s plans to sell the Skeldon, Rose Hall and East Demerara estates, GAWU said it reiterated its opposition to the sale of the properties but said if that is the route government would pursue, it must ensure that the deals are transparent, Guyana’s coffers get the maximum value and that future investors are given the best working conditions. “We also told the Government it may have a duty to insist on the new owners to ensure that the critical working-conditions that have become part of the workers sustenance and remuneration be protected. Similarly, they must ensure workers’ rights are respected e.g. collective bargaining, recognition of their unions, adherence to labour laws, etc,”  GAWU said.

After government announced that after a meeting with trade unions, the David Granger-led administration decided to increase the severance pay allocation from GY$1.75 billion to GY$1.931 billion to allow laid 1,600 of the 4,763 sugar workers who are eligible for GY$500,000 or less to receive the full amount at the end of January, 2018. The other workers would receive 50 percent of their entitlements this month-end and the remainder on or before December 31, 2016

While Minister of Agriculture, Noel Holder indicated that government could only pay 50 percent of the severance to most of the workers at the end of January because of financial reasons, GAWU said the government delegation informed the unions that the need to control inflation was the reason all could not be paid at once. “The Minister of Finance, Winston Jordan, in his remarks, shared with the Unions the developments relating to the severance pay. He cautioned that should the severance payment be made at once it could very well lend to increased inflationary pressures. Our Union shared with the Government team that we believed that workers would spend their severance payments guardedly recognizing that they may have no other source of income,” GAWU said in a statement.

Among the unions’ suggestions made to government were intensive field work to ensure there are higher yields, provision of much more than one acre of land at good locations to ex workers, assistance for infrastructural development, income support, markets, marketing and processing facilities, training and support.

“The Government welcomed our presentation and expressed that it provided good food for thought,” GAWU said, adding that Minister of Social Protection, Amna Ally committed her ministry’s support to assist the displaced workers as best as it could.

GAWU and NAACIE said they also urged the government where it has vacancies that some preference be given to the displaced workers. “This suggestion was accepted by the Government and consideration will be given to some mechanism to develop and to satisfy this undertaking.”