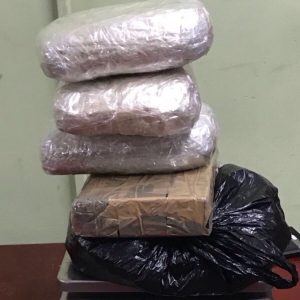 The parcels of suspected cocaine that were seized by CANU in the Soesdyke area on January 19, 2018. (CANU photo)

Three persons were late Friday arrested, and a large quantity of suspected cocaine and several vehicles seized by agents of the Customs Anti-Narcotics Unit (CANU), that anti-drug agency said.

CANU said the operations were conducted in the Soesdyke area late Friday afternoon and evening.

CANU said  “a quantity of cash” was also seized by its agents.

Earlier this month, several Colombians, a Venezuelan and a Guyanese were arrested and charged with narco-trafficking offences connected to 11 kilogrammes of cocaine that CANU said was seized in the Pomeroon area.

Two boats, a car and a large quantity of Guyanese and foreign currency were also seized in that operation.