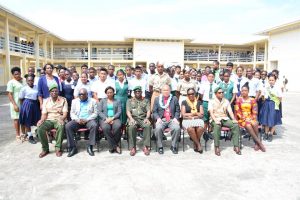 Ministers of Social Cohesion and Education, George Norton and Nicolette Henry, respectively attended the event along with students from the schools participating in the initial phases of the programme. A total of 486 students have already registered for the programme which intends to offer youths, opportunities to learn, expand their interaction, develop life and leadership skills, good morals and discipline, and inculcate the values of citizenship. The NCC has as its motto, “Moulding Today’s Youth, Securing Our Future.” The programme will be conducted and administered through the Guyana People’s Militia. As part of the curriculum the Cadets will receive training in a number of areas including Environmental and Dexterity Training, Communication skills and Academic Training in Modern Languages , Civic Education and Home Management.

Chief of Staff, Brigadier Patrick West in his address expressed thanks to the Hope community and teachers and students of the Hope Secondary school for allowing the unmasking of the programme. He pointed out that the programme aims at building character and teaching young persons vital life skills. To this end, he urged parents and students to seize the opportunity presented to them and pledged the Force’s support. “Our Force will remain devoted to the success of this venture. Our commitment to the development of youths in our society has always been evident,” he  was quoted as saying in a Guyana Defence Force statement.

Brigadier West thanked the parents for entrusting the Guyana People’s Militia with the training and development of the youths. He also extended appreciation to the teachers of the participating schools for partnering with the GPM everyday to ensure that the realities of the programme are realised. He noted that the desire to participate, shown by the children, has been inspiring.

Guest Speaker, Dr Nichole Nedd-Jerrick urged the students to take full advantage of the programme. In a simple, yet profound presentation using modelling clay and a fruit mould she demonstrated for the students how the clay takes the exact form of the mold. This , she highlighted was exactly the National Cadet Corp will seek to do for them. She emphasised that the NCC is intended to mold them into positive contributing citizens of Guyana. In her demonstration , she also showed the students how it was possible that the moulded fruit can grow into a tree sprouting branches and leaves . Again , she explained that this is what is meant to happen with their lives as a result of their interactions through the NCC. They are expected to bloom, flourish and grow for the benefit of Guyana. She also shared with the students her own life experienced to help them to understand the positive growth of individual from childhood into adulthood.

Minister of Social Cohesion, Dr. George Norton noted the timeliness of the programme and its purpose. He congratulated all those persons who have had input into its content and was particularly impressed by those parts of the curriculum which covers communication skills, self-discipline, moral values, jungle and survival training as well as foreign languages. The minister said he is looking forward to seeing the programme in its full effect and noted too that he was also pleased to see St. Ignatius Secondary school on the list of participating schools. “Any programme that instils the concepts of accountability, of responsibility will have my full support and that of the ministry. For only then would we be able to produce a caliber of young Guyanese of the finest quality. This is being done at an appropriate time when Guyana is at this phase of its development, where we must ensure that we enjoy the maximum benefit of all our citizens, particularly our youths,” he said.

Minister of Education, Nicolette Henry also extended her ministry’s full support for the programme, noting that she looks forward to a fruitful and productive partnership as the programme comes into full effect.

Prior to today’s launch, Training Officer of the Guyana People’s Militia ,Major Eon Murray conducted several stakeholder meetings and presented the objectives of the NCC and solicited their input and suggestions for a well rounded finished product. This morning he gave a thorough brief , giving the audience a deeper and full understanding of the National Cadet Corps .