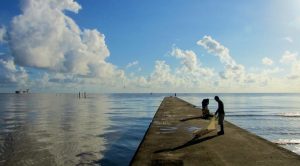 The Guyana Defence Force said at about 3 PM Friday one of its Coast Guard ranks, along with the unit’s welfare officer, foiled a suicide attempt by two secondary school students at the Kingston Jetty, Georgetown.

“The two teenagers, who were allegedly preparing to jump into the deep waters at the mouth of the Demerara River, were spotted by an observant rank, who immediately intervened with the assistance of the Unit’s welfare officer,” the army said in a statement.

The Guyana Police Force said it subsequently summoned to the scene and the teens were taken into custody.

A senior police officer told Demerara Waves Online News more than three hours later at 6:11 PM that he was unaware of the occurrence and he was yet to be briefed.

The Director of the Ministry of Social Protection’s Child Care and Protection Agency, Ann Greene told Demerara Waves Online News that the boy and girl, who both hail from the East Coast Demerara, were in her care and were being counselled.