ExxonMobil gets generous tax concessions; Guyana stands to earn US$7.5 billion in 20 years 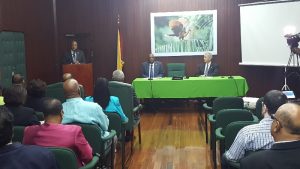 Minister of Natural Resources, Raphael Trotman addressing an event to officially release the agreement between government and ExxonMobil and its partners.

ExxonMobil, along with its partners, that is preparing to begin commercial oil production in early 2020 at the Liza 1 Field offshore Guyana have been granted very generous tax concessions, even as both parties are touting the hefty earnings that the country will make in 20 years from one field alone.

The 2016 Petroleum Agreement states that Esson Exploration and Production Guyana Limited, CNOCC Nexen Petroleum Guyana Limited and Hess Guyana Exploration Limited as well as companies which are working for them in Guyana are exempted from a range of taxes and duties. “No tax, value added tax, excise tax, duty, fee, charge or other impost shall be levied at the date hereof or from time to time thereafter on the contractor or affiliated companies in respect of income derived from petroleum operations or in respect of any property held, transactions undertaken or activities performed for any purpose authorised or contemplated,” states the document.

The contract, which was released after intense public pressure, however, provides for the company to pay import duties, income taxes and other taxes on services provided other than those related to petroleum services under the agreement, rent due to the government for land rights, local government rates and taxes, and a range of miscellaneous fees.

The contracting companies, affiliates, contractors and sub-contractors as well as their staff must pay income and corporation taxes.

Further, the agreement prohibits the government from levying or demanding any additional monies in the future. “After the signing of this agreement and in conformance with Article 15, the government shall not increase the economic burdens on the contractor under this agreement or by applying to this agreement or the operations conducted thereunder any increase of or any new petroleum related fiscal obligation, including, but not limited to any new taxes whatsoever, any new royalties, duties, fees, charges, Value Added Tax or other imposts,” states the accord.

With regards to import duties, the government has committed to ExxonMobil, its partners, and sub-contractors engaged in petroleum operations to waive all duties, taxes and other imposts on all equipment and supplies except food and alcoholic beverages. The company is also exempt from paying export duties on such items that have been brought into the country for petroleum operations.

Delivering remarks at the official disclosure of the contract in the presence of members of the business community, government ministers and trade unionists, Minister of Natural Resources Raphael Trotman said the overall oil and gas operations could see Guyana earning US$80 billion in years to come from the more than 3.2 billion barrels of oil that have been discovered so far in the Stabroek Block by ExxonMobil.

Trotman said when commercial oil production begins, Guyana would earn at least US$1 million daily or just over US$300 million annually.

ExxonMobil’s Country Manager, Rod Henson told the event held at the Ministry of the Presidency that from the Liza 1 Field Guyana would earn about US$1.5 billion after five years and US$7 billion over a 20 year period- all at an estimated US$50 per barrel of oil. Henson noted that his lawyers have advised him to point out that while those figures are guaranteed, they are based on price assumptions.

Henson noted  that 75 percent of the earnings would for the first four years be set aside for cost recovery and then that would significantly decline to cater for recovery and operational costs.