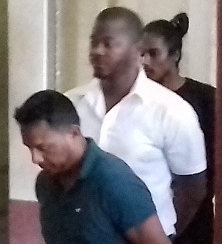 The charged read that on December 24 (Christmas Eve) they had 65.027 kilogrammes of cocaine for the purpose of trafficking.

Chief Magistrate McLennan granted bail in the sum of 300,000 for each defendant under the condition that they report to the Leonora Police Station every Friday until the completion of their trial

Reports are that on the day in question, Police acting on information received went to the home of Anderson and conducted a search on his premises.

The said drug was found in Anderson’s car sealed in a gas cylinder.

The said cylinder was taken to the police narcotics branch where it was searched and 59 parcels with white like substance was found.

It was checked and tested positive for cocaine.
Anderson in a caution statement identified Williams as the person that gave him the item.

In turn Williams, in a caution statement, had admitted to giving Anderson the said items.