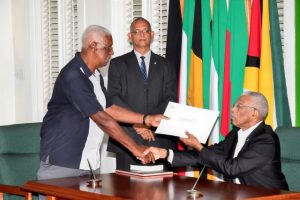 Desmond Trotman receiving his instrument of appointment as Elections Commissioner from President David Granger at State House on Friday, November 24, 2017.

The Alliance For Change (AFC) is disappointed that President David Granger did not select its nominee for appointment as an Elections Commissioner, but the Guyanese leader said he selected Working People’s Alliance (WPA) executive member, Desmond Trotman because of his experience.

The AFC was noticeably absent from Trotman’s swearing in at State House, but the President said they are not required to send representatives. He replaces the recently deceased Sandra Jones who had been nominated by A Partnership for National Unity (APNU) in 2012.

AFC Leader, Raphael Trotman said his party was disappointed that former parliamentarian, Trevor Williams or his alternate Beverley Alert was not selected to sit on the seven-member elections management authority. “We are entirely disappointed in the process and that once again the AFC feels that an injustice has been meted out to it,”  he told reporters on Friday.

The AFC later said in a statement that, “further, acknowledging that 65% of the electorate is under the age of 40 years, the AFC believes that the appointment of the GECOM commissioner should have taken this salient point into consideration. In this regard, the rank and file members of the AFC have expressed reservation about the appointment and were expecting the new commissioner to be a youth or a woman as was proposed by the party”. Against that background, the AFC said that reinforces the need for the political agreement named the almost three-year old Cummmingsburg Accord to be revised.

Raphael Trotman, a co-founder of the AFC, suggested that the People’s National Congress Reform- dominated APNU has broken its promise on having an AFC nominee sit as a GECOM Commissioner.
“We have been promised the position for some time and we had really hoped that having been seen as a worthy partner of the Coalition we would be seen as worthy to name one of our ranks to the position,” he said

President Granger, for his part, told reporters that “my judgement prevails” and he was constitutionally empowered to pick Desmond Trotman from among the nominees coming from each of the six parties in the governing coalition including the PNCR. “Experience, you can’t fake experience,” he said in reference to Desmond Trotman.

Elections Commissioner Trotman said he has over 30 years of experience in electoral matters. “As you may know, I have interfaced with the Commission at different levels and so I think I bring some value to the work of the Commission,” he said. He further remarked that in keeping with President Granger’s wishes for a free and fair elections, his contributions would be important.

Asked why he did not ask APNU and AFC to each submit one nominee rather than ask the five under APNU and AFC to submit individual nominees, the President said “I feel that all parties, which are in the coalition, must be consulted. Every party in the coalition is represented in the National Assembly and that is how I do my business. I consult with everyone,” he said.