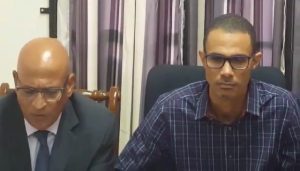 Alleged sexual misconduct by a Bishop’s High School teacher is now in the hands of the Guyana Police Force after a former female student detailed her “emotional” encounter to investigators.

Head of the Criminal Investigations Department, Assistant Commissioner, Paul Williams told Demerara Waves Online News Jackson has not been arrested but “in case of anything we will have to bring him in for questioning”.

Jackson has already bluntly denied the accusations and has said he has evidence to show that Cultural Policy Advisor, Ruel Johnson has been targeting him because he had been in contact with a female with whom Johnson now has a relationship. Johnson has not commented on that.

Sources said more alleged victims could come forward in the days, following the “emotional” disclosure by one the girls while she was a student at Bishop’s High School, historically regarded as one of Guyana’s premier educational institutions.

Meanwhile, that school’s Headmistress, Winifred Ellis is expected to be reprimanded after Minister of Education, Nicolette Henry and other top officials of the school’s board and the Parent- Teachers Association listened to a recording in which the educator blamed female students for making themselves vulnerable to males.

“At the consultation, a recording of the Headmistress’ address to the students was presented and the Head Mistress had an opportunity to provide an explanation. Based on the evidence presented and the explanation proffered, the committee found the Headmistress culpable of breaching the regulations under the Education Act 39:01 section 35 “Inappropriate behavior by teachers in school” which is liable to a first warning,” the Ministry of Education said.

In addition to the recommended reprimand, the Ministry of Education said it would be providing training and support to teachers on how to deal with children on sexual issues. That ministry has also undertaken to “provide counseling support which was requested by the students.”

The accusations against Jackson were formally made in Johnson’s letter to the Chief Education Officer about one week ago.

2017-11-24
Denis Chabrol
Previous: AFC disappointed Elections Commissioner is not “youth” or woman” but Granger banks on “experience”
Next: Top cop Seelall Persaud ordered to stay off job “in the public interest” as retirement nears