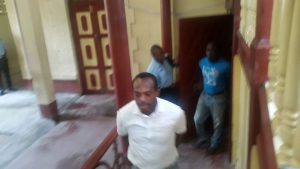 Two police men , including an undercover cop and a detective, were Thursday arraigned on a charge of allegedly murdering a city businessman last month.

Eastman, a former Best Cop, and Williams were charged based on allegation made by the alleged hit-man and ex-convict, Aubrey Bobb, that he was hired and given the gun by Eastman to commit the act.

City Magistrate, Judy Latchman remanded the duo to prison until December 5, 2017, but not before asking Police Prosecutor, Stephen Telford to address concerns by the defence lawyers about the safety of their clients.

Telford told the court that those concerns would have to be dealt with by the prison authorities.

The prosecutor also gave an undertaking to ensure that an alleged threat against Eastman by an identifiable person again is investigated.

Attorney-at-Law, Nigel Hughes told the court that Eastman has over the years successfully investigated many crimes and so his safety in the prisons is at risk. He also noted that moments before the case was called, an identifiable member of the public, who was previously charged and remanded, threatened Eastman. 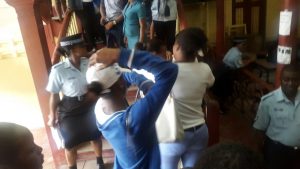 Prior to the case being called, Eastman’s relatives went to the prisoners in the dock , rubbed his head and spoke with him. That prompted Prosecutor Telford to ask other policemen in the courtroom to “stop, avoid these people from troubling…”

During the hearing, a sobbing woman was escorted out of the courtroom as Hughes was expressing concern for Eastman’s safety.

After the hearing was completed and the prisoners were exiting the chute to go the lockups downstairs of the Georgetown Magistrates’ Court, the sobbing women huddled together.

While Eastman was being placed in a separate cell, he shouted the names of three policemen as he held a bottle of water.

2017-11-23
Denis Chabrol
Previous: Prisoner calls 911 and threatens to kill President
Next: AFC disappointed Elections Commissioner is not “youth” or woman” but Granger banks on “experience”