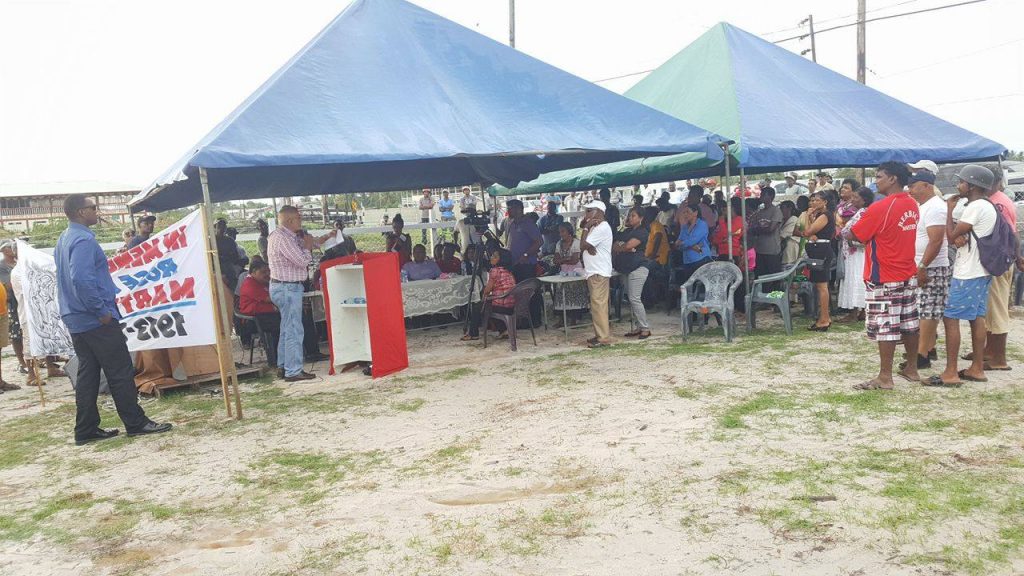 The opposition People’s Progressive Party (PPP) on Sunday intensified its call for sugar industry workers to “struggle” against the closure or scaling down of several estates, saying the ailing Guyana Sugar Corporation (Guysuco) can be revived to supply refined sugar, ethanol, distilled rum and electricity.

Addressing about 300 persons at the Rose Hall Martyrs monument, former President, Donald Ramotar accused the David Granger-led administration of taking a political rather than an economic decision to close several estates and so the only response to that and other anti-working class measures is to embark on a struggle.

“Comrades, there can be only one answer to this: We have to struggle…there is no shortcut and to struggle effectively you have to be organised,” he said.  He identified key ingredients to the struggle as better organised groups of the Guyana Agricultural and General Workers Union (GAWU), People’s Progressive Party (PPP) and Progressive Youth Organisation (PYO).

“You have to make sure that your union functions better. In the first instance, your GAWU groups have to be functioning at the maximum at this time in our country because we cannot fight without organisation.

You have to ensure that your political struggle is also geared because let us be clear on this matter- sugar is not just only an economic struggle. There is also a political struggle and you have to ensure that your PPP groups and your PYO groups are functioning properly so that you can carry on a fight to save this industry and it can be saved if we mount a fight,”  the former Guyanese leader said. 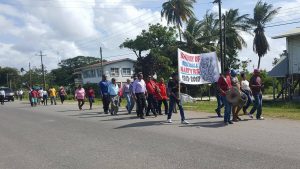 The veteran politician reasoned that the Guyana government suspended metered parking in Georgetown because the issue was becoming a political problem, rather than merely because ordinary people were being affected. “They were not moved by the harm it was having on the economy. They were moved by self-preservation because they see that there was a political consequence to this. That is why political pressure has to be put on them and they must know that there is a political consequence to the action they are taking (in relation to the sugar industry),” he said.

Ramotar, a former director of the State-owned  Guyana Sugar Corporation (Guysuco) , said the industry began falling on hard times when the European Union (EU) imposed a 36 percent cut in sugar prices about 10 years ago but  it could be resuscitated. He recommended that government and Guysuco build a sugar refinery to satisfy the Caribbean’s  240,000 tonne annual demand for refined sugar, produce ethanol for a vehicular fuel mix, produce distilled rum to supply other Caribbean rum producing nations and install more co-generation plants at the several other estates to sell electricity to the national grid.

He argued that the billions of dollars that have been disbursed to settle legal cases could have been given to Guysuco, a large debtor to the Guyana Revenue Authority and the National Insurance Scheme.

Former Minister of Culture, Dr. Frank Anthony earlier labeled the APNU+AFC government  as “despicable” by scaling down the sugar industry and creating unemployment instead of jobs. Touching on the issue of severance pay, he said that is a legal entitlement that must be paid.

In a similar vein, Anthony called for struggle against a government has that has promised jobs while electioneering but is now putting people on the breadline. “We got independence, and democracy was being trampled upon and sugar workers were always out there at the forefront of the struggle for the restoration of democracy and I am sure that the militancy and the vibrancy of sugar workers- that they will not give in and allow this government to trample upon their rights,” said Anthony whose brainchild was the Rose Hall Martyrs Monument. 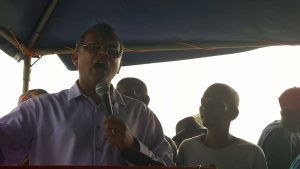 He accused the Granger-led administration of increasing ministerial salaries and taxing the nation as a substitute for failing to attract investment. “They are not a government that is putting money in your pocket. They are a government that is picking your pocket. That is what they are doing- creating hardship for the ordinary persons in this country and so in every sector there are people who are against them,” said Anthony, the second highest vote-getter at the PPP’s Congress held late last year.

Political and financial commentator, Ramon Gaskin warned that shrinking of the sugar industry would result in a loss of at least 10,000 jobs and the only response, he said, must be struggle. “These people are stubborn and the only thing they understand is struggle,” he said. He noted that Guysuco Chief Executive Officer, Errol Hanoman is being paid GYD$4 million monthly to head a “slave-master company” that is perpetrating “wage slavery.”

Gaskin, who had been harshly critical of much of the PPP administration, said Guysuco’s Chairman, Economics Professor Clive Thomas had said in Commission of Inquiry that the corporation would have produced GYD$13.2 billion profit from cogeneration,  land sales and packaging in 2016. Thomas had estimated that Guysuco would have needed GYD$5 billion in subsidy for this year, but instead asked the National Assembly for GYD$9 billion.

PPP speakers blamed the governing A Partnership for National Unity+ Alliance For Change (APNU+AFC) for breaking its  electoral promises by levying Value Added Tax (VAT) on essential food items, failing to provide increased paddy prices, and not delivering on a promised 20 percent salary and wage hike. “Every single working class group has been losing benefits since this government came into office

Region Six Chairman, David Armogan on Sunday urged residents and workers of Rose Hall Estate to resist the closure of the estate because the economies of several areas will collapse. 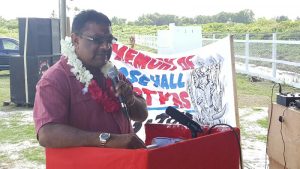 “These people want to convert Berbice into ghost train and we can’t allow it,” he said. Government plans to close a number of estates, shrink others and sell out others altogether. Already, Wales Estate has been closed and government has embarked on diversification programme there, while employing some of that estate’s workers ar Uitvlugt, West Coast Demerara.

Speaking at an event to mark the shooting death of several Rose Hall sugar workers by colonial police on March 13, 1913, Armogan said workers must mobilize and be in solidarity to protect their inheritance given to them by their foreparents.
He said they “must come out in our numbers” to peacefully tell the government not to close the estate. He warned that closure would result in the shutdown of New Amsterdam, Number 19 Village and other neighbouring area, depression and crime.
Armogan said land preparation and fertilization of fields have been halted at Rose Hall, a sign that that estate is being prepared for partial closure.
Government has aid it could no longer afford to continue operations of the loss-making and highly indebted Guyana Sugar Corporation in the same manner.
Indian Action Committee (IAC) activist, Evan Radhay Persaud recounted that on that fateful day, 56 persons were shot and 15 died, several in hospital.
Region Six (East Berbice-Corentyne) is controlled by the opposition People’s Progressive Party whose supporters are mainly East Indo-Guyanese. The governing APNU+AFC coalition is dominated by the mainly Afro-Guyanese supported People’s National Congress Reform (PNCR).