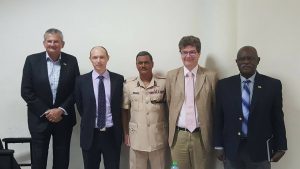 British High Commissioner to Guyana, Greg Quinn on Monday said he is confident that recommendations by his country’s security expert to reform Guyana’s security sector would be implemented and not left on a shelf.

“This is something we want to see action, not just sitting on a shelf,” he remarked at the opening of a Risk and Liaison Overseas Network (RALON) training for Guyana’s Immigration Officers being conducted by the UK’s Immigration Enforcement International. “We are funding the advisor here. We are not funding the advisor here to then produce a piece of paper which looks nice on a shelf,” he later told reporters.

Quinn said British Senior Security Sector Reform Advisor to President David Granger, Mr. Russell Combe has during his seven-week old tenure has been gathering information. “I think he is is gathering information for his initial impressions report and we’ll look at that and see what the next steps are after that,” he said when asked by Demerara Waves Online News.

The United Kingdom (UK) envoy said he is confident that the Guyana government would implement the recommendations by Combe under the auspices of the Security Sector Reform Programme (SSRP). “If, anything I think there is the clear political commitment at the highest level.” At the same time, he said he thought it was important to stress the need to ensure that the project is implemented.

“Implementation is important. We have had lots of these things in the past which have been done, so lots of reviews have been done by the UK which are then not actually, for a variety of reasons, some having to do with resources are not being implemented but I think it’s important that whatever the advisor comes up with this year we can actually start putting in place for implementation,” he said.

Minister of Citizenship and Immigration, Winston Felix said the opening of the RALON training for immigration officers is part of a package to boost immigration surveillance and strengthen passports against fraudulent activity “which is intended to protect Guyana and improve on our national security.”

With assistance from the International Organisation for Migration (IOM) and the European Union (EU), Guyana has already decided to improve the efficiency and quality of the various types of visas and the turnaround time between application and delivery.