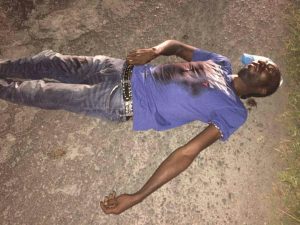 The suspected bandit who was shot dead at Belvoir Court.

An unidentified male suspect was shot dead during an alleged exchange of gunfire with three occupants of a motor car, one of whom is a licensed firearm holder, police said in a statement.

“The unidentified suspect is alleged to have opened fire on the occupants of the car after they adopted tactical manoeuvre to evade him, when he attempted to commit a felony,” the Guyana Police Force said in a statement.
This incident occurred about 00:30hrs this morning at Belvercourt, Blygeiziht Gardens
Investigators were told that at that time one of the occupants was being dropped off by his colleagues at the address, after the trio returned from the Giftland Mall.
A .32 pistol alleged to belong to the deceased suspect, along with seven .32 spent shells and a cellular phone were found at the scene, police said.
Police did not say whether the other occupants of the car in which the businessman was travelling possessed guns and if they opened fire on the bandits.

2017-03-19
Denis Chabrol
Previous: Board of Industrial training graduates 69 in Linden
Next: PPP rallies supporters in sugar belt to “struggle” against closure of estates