Stop complaining about taxes and “get busy”- Natural Resources Minister 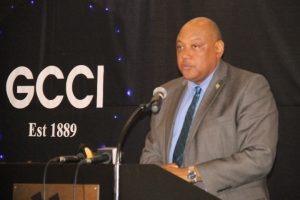 Minister of Natural Resources, Raphael Trotman attending the the Georgetown Chamber of Commerce and Industry’s 2016 Dinner and Awards Ceremony.

As Guyana’s government and opposition parliamentarians prepare to begin a week-long debate on Monday, Minister of Natural Resources Raphael Trotman has urged Guyanese to stop complaining about the budget and “get busy”.

“So what are we to do, complain about the VAT on water and electricity and do nothing else, or complain and get busy preparing? The Government of Guyana would prefer that we all lived in a country where there are no complaints but we know that this can never be. However, we invite you to get busy,” he said.

Trotman suggested that criticisms of the GYD$250 billion fiscal package by the private sector and opposition are senseless because it is evident that there has been a slump in commodity prices and Guyana’s sugar industry continues to perform poorly. “The economy felt the drag of dismal output performances in sugar, rice, forestry, and construction, including housing,” Finance Minister, Winston Jordan has said.

“We don’t have to be economists with fancy titles to know this. This is an incontrovertible fact that we must accept in government, in opposition, in the private sector, in civil society and within the general citizenry. We can choose to find a scapegoat and to point fingers or we can look beyond the horizon to what is coming,” he told the Georgetown Chamber of Commerce and Industry’s dinner and awards ceremony held last Friday at the Marriott Hotel. 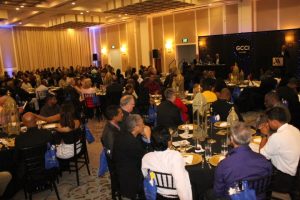 Attendees at the Georgetown Chamber of Commerce and Industry’s 2016 Dinner and Awards Ceremony.

In an effort to deal with criticisms from the business community and the opposition, government on Saturday released a statement that focused on reduction of Value Added Tax on  businesses, Corporation Tax and Personal Income Tax and the reduction of the Income Tax threshold, saying that they effectively amount to a GYD$9.5 billion stimulus package. No mention was made of the 14 percent VAT to be charged on water and electricity.

The Natural Resources Minister said the impact of fluctuating commodity prices on Guyana’s economy including the dependence on sugar, bauxite , rice and gold to prop up the country during hard times. “Memories fade easily, but monuments are everlasting and in times of despair and confusion it is to them that we must return for strength and direction. I say this to say that while some may find reason to decry the performance of the economy, this story is not new to Guyana – in a sense it is the same play, same actors arrayed in different scenes. Such are the vagaries of managing an economy in difficult global circumstances when the interconnectedness of our systems makes us vulnerable to exogenous shocks and tremors,” he said.

Opposition Leader, Bharrat Jagdeo and the Private Sector Commission (PSC) have separately  criticized the budget, essentially  saying the tax measures such as the 14 percent Value Added Tax on water and electricity above GYD$1,500 and GYD$10,000 monthly will hurt the poor and middle class.  The PSC has said there is no clear economic strategy and predictable taxation policy. Jagdeo, leaving the door open for bipartisan talks on the budget, has called on President David Granger to withdraw or amend the package to ensure there is human growth and development.

The Finance Minister’s tax-driven budget appears hinged on a forecast of a lower gold price due to a likely increase in interest rates in the United States and the tapering off of the European Central Bank’s (ECB) bond buying programme and an increase in the price of oil from US$43 per barrel so far this year to US$55 per barrel next year, barring an agreement by the Organisation of Petroleum Exporting Countries (OPEC). “Mr. Speaker, the threat of gold prices declining in 2017, combined with rising oil prices and global issues such as derisking and climate change, will pose a major risk to our economy that will demand enlightened management,” he has said.

Real Growth in 2016 has plummeted from a projected 4.4 percent to 2.6 percent,  Sugar is projected to decline by 18.7 percent to reach 188,000 tonnes in 2016 partly due to dry weather, late planting and frequent strikes;  a 33.3 percent contraction in  forestry, principally due to Barama halting the production of logs and the UK’s restriction on greenheart logs originating from Guyana and construction fell from a budgeted 10.5 percent to a projected 3.2 percent in 2016, related to a decline in activity in the housing sector and the Public Sector Investment Programme (PSIP).

Mining and quarrying is projected to grow by 35.7 percent in 2016 and gold is expected to reach 644,814 ounces as a result of the combined efforts of small and medium-sized miners responding to the generous concessions granted by Government and rising global gold prices, and the two foreign-owned companies reaching full capacity.  The bauxite industry is expected to grow by 9.6 percent, while the other mining and quarrying sector  projected to rise by 22 percent, mainly on account of a 92.5 percent increase in sand production and a 9.2 percent increase in stone production.

The GCCI gave recognition to outstanding businesses and individuals in Guyana at its 127th Annual Gala Dinner and Awards Ceremony. Recipients of this year’s 2016 Awards were selected from a robust list of finalists and nominees from across Guyana. The recipients are: